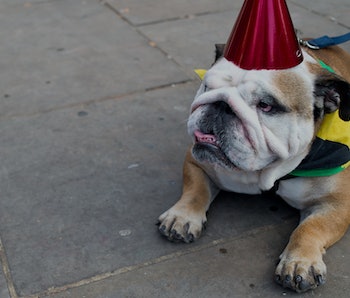 It would seem your dog knows when you’re using your sweet, cutesy voice over your angrier one: A study published on Monday in the journal Science indicates that dogs can distinguish both vocabulary and intonation, precisely the same way humans do. Longtime researcher of dog vocabulary Attila Andics, along with colleagues at two Hungarian universities, exposed dogs to a series of recordings comprising a range of both variables.

Andics’s research shows that dogs can discern vocabulary regardless of whether it arrives in a positive (“praising”), neutral, or negative intonation. This makes sense: A dog trained to respond to, say, the word “sit” will do so whether you ask nicely or angrily. (Note: We at Inverse do not condone using a mean tone of voice on dogs. Just, you know, sometimes they break stuff or poop in your socks.)

Dogs, it seems, process vocabulary in the left hemisphere of the brain and intonation in the right hemisphere — just like us. They’re not capable of inventing vocabulary of their own — only humans can do that, so far as we know — but they can certainly understand bits of ours. When certain words and intonations are consistently associated with praise, they’re capable of remembering that and expecting a reward next time they hear the combination.

The researchers used a recording of a female trainer with whom all the dogs were familiar, since the familiarity of the voice can affect response. Praising intonation generally means a higher and more varied pitch, to which all the dogs had learned to respond. The researchers found three neural mechanisms of speech processing in the dogs they studied: the bias toward meaningful words (think the commands or adjectives you use with your dog every day: sit, good, bad, stay, and so on) are separate from their intonation; the ability to pick up on intonation regardless of word meaning; and the consistent reliance on “both word meaning and intonation when processing the reward value of verbal utterances,” the paper notes. “All three findings reveal functional analogies between dog and human brain mechanisms.”

A true best friend to humans — because they get you like no other animal can.