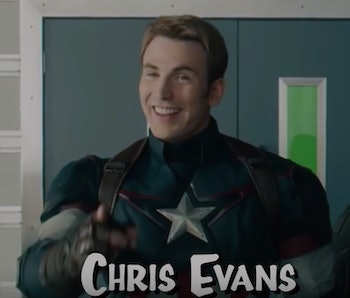 What if, instead of a series of swashbuckling, superhero action films, The Avengers were the cast of a ‘90s sitcom? That’s exactly what a YouTuber thought when he decided to mash up the superhero team with the iconic opening intro to the quintessential ‘90s series, Full House.

A lot of the scenes YouTube user, “zach” repurposed are taken from blooper reels across the first Avengers movie and its sequels, Age of Ultron and Captain America: Civil War. The result? A perfect combination that takes the best bits of comedy from the dysfunctional superhero team with the nostalgic hijinks of the extended Tanner family. The video even includes new members like Tom Holland’s Spider-Man.

Beyond that, there are actually a lot of parallels between the Full House family and The Avengers. A mismatched group of disparate characters brought together under one roof? Check. A trio of men that include an old-fashioned dad, a blond haired comedic relief dude, and a dark haired cool guy? Check. An Olson sibling? Check.

As for everything else, the video is incredibly well-synched to the scenes of The Avengers at their most goofy or heart-warming. While the team might never be the same after the events of Captain America: Civil War, at least we’ll have this video to remind us of all the good times they shared. Maybe even what might have been if the super-group simply chose to come under a single roof to raise three precocious children, instead of fighting world-destroying evils.