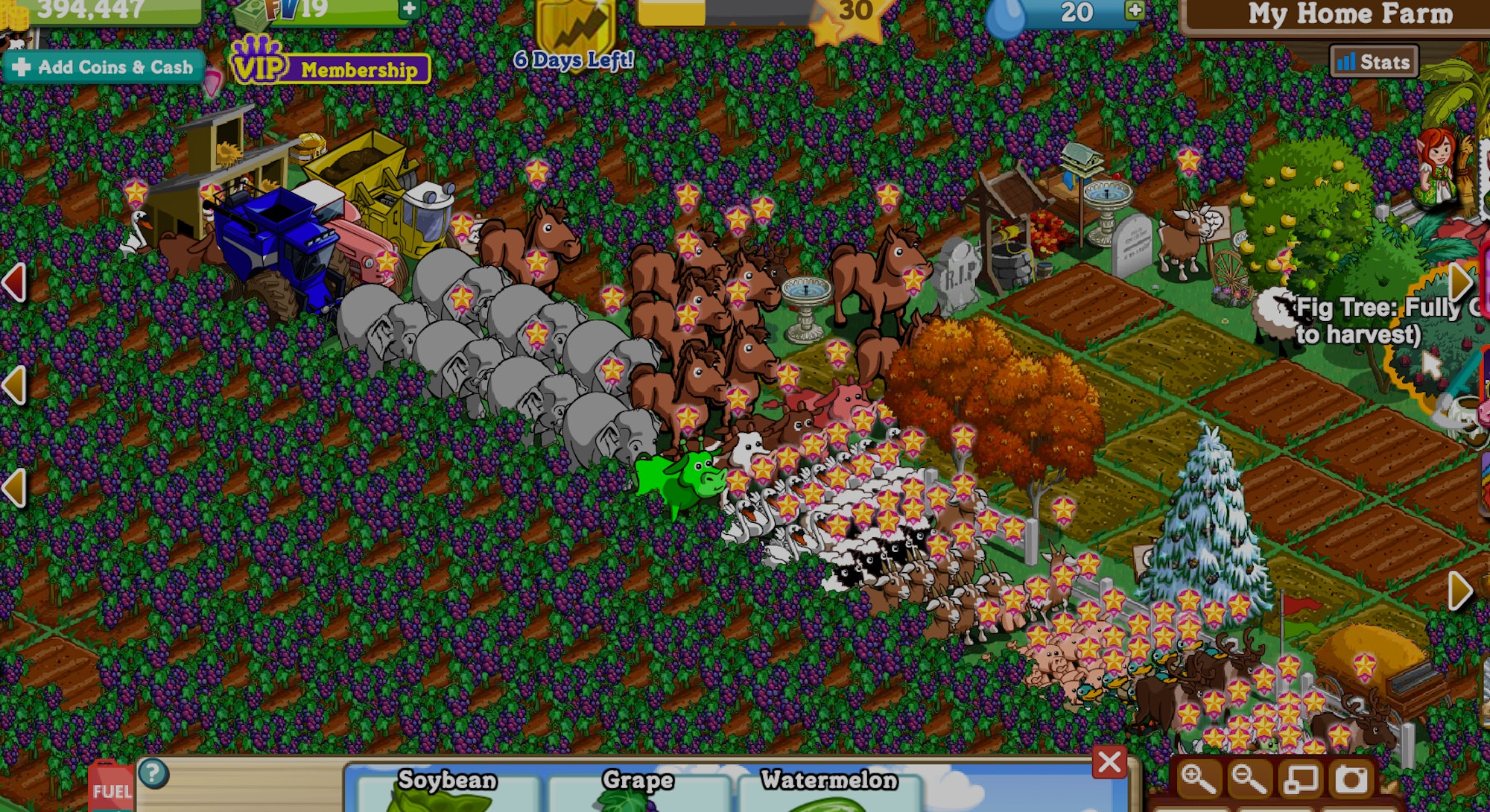 I have a very clear memory of leaving my junior prom early to harvest strawberries that did not exist. It was for a game called Farmville, which everyone played until their mom figured out what it was, then slowly forgot – after losing one’s virginity began to seem like a realer possibility.

Six years out from the Great Prom Departure, I returned to my farm to see if it, like most of my 17-year-old ambition, had withered into an unrecognizable tangle of so-so effort and intention. Turns out it hadn’t – like my life at present, however, it is obnoxious, glitchy, and gets old pretty fast.

It’s all still there. A whole field of grapes — some withered, sure, and but some are inexplicably ready to be fermented after over half a decade, even without any sort of care. So is the alien cow, which cost me so many coins and hours of rest that I flunked a history quiz the day after I finally bought him. And I can still read the little messages my friends left me on the game.

If you were one of the few that avoided the 2010 Farmville boom after its 2009 release, let me walk you through how the gam was played: You plant things. You wait. You click on the crops when they’re ready. And that’s it.

As with Neopets, another landmark digital game, the animals on my farm did not die, or even look sick. They can’t move, and are only there for you to milk them. Milk comes from animals that should not produce it. You can milk peanuts out of elephants, which is, I am pretty sure, based on certain fact.

Although my farm is more or less unchanged, it appears that Zynga has tried to stay on trend in a series of misguided promotions. Different pop-ups inform me that a “wily gopher” is hiding in my watermelons with a gift (kinky!), and tries to convince me to put my cows in police uniforms. Why? I don’t know. I’m down.

According to a scathing TIME article from 2010, over a tenth of the American population logged in to perform “a series of mindless chores on a digital farm” in Farmville’s first year of release, which was pretty impressive accomplishment for Zynga, though Americans love doing dumb, pointless things that take no effort.

Of course, within a year participation had waned, and even the release of the illustrious Farmville 2 and a series of bizarre and sometimes racist “global farms” (where you can harvest anything from a haunted house to a colonized Indian field) failed to revive the craze after 2011, by which point I was doing so-so in college because of an app game called Pretty Pet Salon. Whatever, you are dumb if you don’t like that game. Obama brings his dog in and you need to groom it and it’s all very exciting and worth doing poorly in a sociology class.

Back to Farmville. At this point, it appears that even Zynga has neglected its once-biggest moneymaker in favor of its other success story, Words With Friends. During my return, my farm froze every 45 seconds, shuts my computer down without any warning three times, and all before I can harvest all my grapes another inane and confusing pop-up halts the action.

Despite its developer’s attempts to bring it into the present, Farmville is a time capsule from before most middle-class kids could afford iPhones, before first relationships collapsed on themselves like a rotten heap of digital strawberries, before we became substitute teachers and baristas. It, like us, was pretty dumb, and pretty simple, but that’s what was cool about it.

By far the most exciting part of returning to a glitchy imaginary agricultural landscape was rediscovering the messages your friends could leave you, which were nestled beside your radioactive goats and fig trees hilariously styled to look like a penis.

After raising my laptop’s temperature to about that of the earth’s core and harvesting several hundred thousand dollars in six-year-old grapes, I decided Farmville is better left in 2010 where it belongs. Go forth, friends, thousands of days into the past and back to a time where you’d shuffle to a 7-11 cashier and purchase Farmville bucks to get a topiary in the shape of Mark Zuckerberg’s head. Enjoy Zynga’s desperate attempts to bring you back through the Farmville Olympics, the Farmville chariot races, the Farmville ghost tours (all real). At the end of the day, we all know better now.