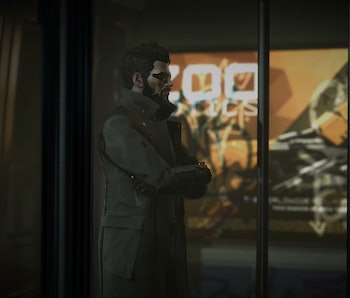 In the Deus Ex franchise, player decisions have always been built into the core experience so that you can come and go as you see fit. While this applies to just about every system in the game, one key focus is on lethal vs. non-lethal actions when you’re progressing through missions. Much like Deus Ex: Human Revolution, both styles are equally viable with a few caveats in Deus Ex: Mankind Divided, but — regardless of the approach you’re personally interested in — keeping a non-lethal arsenal for most of the game is the way to go.

Progressing through Mankind Divided as a non-lethal player is typically a strategy reserved for those who prefer a stealthier, more complete approach to a bad situation. By working through missions without killing, you’ll make the most out of each mission, because a non-lethal approach forces you to look for alternatives and hidden areas which contain plenty of valuable information pertaining to the mission at hand in addition to the main story.

It also means you’ll be spending plenty of time with some of Adam Jensen’s more unique augmentations too — like the TESLA, Social Enhancer, and Smart Vision — in order to put enemies on the ground while they’re still breathing and make sure that key suspects throughout Mankind Divided’s story stay alive to play their part. Such individuals provide an absolutely massive amount of information regarding the state of the world, and by eliminating them you’d be stripping yourself of that experience.

By avoiding confrontation and sticking to the shadows, you’ll discover that you are almost always more in-control of the situations you’ll be facing throughout Mankind Divided as well. Due to the intensity of the human vs. augmented conflict that the game focuses on, many missions you’ll be playing through will actually tell you to try and retain a low profile in order to keep tensions from elevating any higher. So while it might be fun to shoot your way through a bank in order to obtain a document for a friend, it might not be a bad idea to sneak through and only take out a few bad guys in order to maintain both your cover, and your friend’s.

Mankind Divided certainly does take note of violent action too, especially when it comes to the main story missions throughout the game. NPCs and key players will almost always comment on your strategy when approaching missions, with many of them favoring the non-lethal approach in order to keep things under the radar. Obviously, this does depend on the context of the mission — meaning that if you’re attacked by terrorists? It’s probably safe to shoot back instead of sneaking around trying to knock all of them out (which, by all means, you’re welcome to do).

While playing a non-lethal Jensen, you’ll rely heavily on the Stun Gun and Tranquilizer Rifle combined with a few melee knockouts. Like the regular handgun, the Stun Gun is an excellent weapon for close quarters engagements that will instantly knock out an enemy. The Tranquilizer Rifle on the other hand requires a bit more finesse due to a delayed knock out effect — unless you get a headshot. Remember, you’ll also have to hide the bodies of your enemies to avoid any direct confrontation. Their friends will otherwise discover them, wake them back up, and immediately come to hunt you down.

All that said, there are many encounters in Mankind Divided where non-lethal action is going to be extremely difficult to pull off without the right augmentations. As such, you’ll want to make sure to invest in a few specific augmentations right off the bat:

Smart Vision: This augmentation is key to situational awareness, allowing you to spot and mark targets with the LiDAR Mark-Tracker augmentation through walls.

Glass-Shield Cloaking: This personal shield allows you to walk straight through lasers and enemy lines without being noticed, of which you’ll find many.

Hacking: In Mankind Divided there are three separate hacking skills: capture, fortify and stealth. You’ll want to upgrade these as soon as possible to get into places you shouldn’t be.

Remote Hacking: Like hacking, but from a distance. You can disable cameras, security devices, and more remotely — allowing for safe passage without being seen.

A non-lethal approach doesn’t just feel right; there’s an experience bonus for completing missions flawlessly. Compared to lethal actions, non-lethal ones tend to net you a slightly higher experience gain per action (like knocking out an enemy, or avoiding them entirely). Thanks to this additional experience, you’ll gain access to better augmentations faster, allowing you to boost your capabilities earlier.

It may not seem like the most rewarding experience immediately, but the non-lethal approach to Mankind Divided is certainly more rewarding in the long run. Not only does it help ramp up your augmentations earlier in the game due to a slight experience boost, but it helps to explore each level to its fullest while playing through your missions. The game’s at its best when you’re taking the time to slow down, evaluate the situation, and then execute the perfect plan, but, hey, that doesn’t mean you can’t go wild on occasion if you want to test out a few new weapons during Jensen’s downtime.