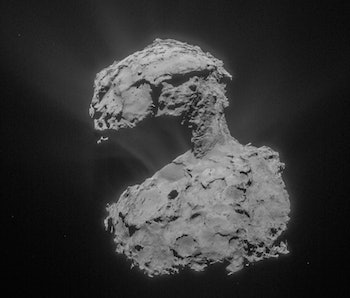 Landing a rover on Mars isn’t easy, so NASA decided to go in a different direction for its latest concept — the space agency designed a freaky floating glider that will drift onto asteroids and the red planet itself using the same forces that let baby spiders float through the air.

When gravity pulls in the rover you’re landing on Mars too fast, it’s tempting to tell gravity to stuff it. But NASA engineers change their tune when they have to land on a planet with just 38 percent of the gravity on Earth.

“It is very challenging to have locomotion of any robotic vehicle in the absence of gravity,” said Marco Quadrelli, an engineer at NASA’s Jet Propulsion laboratory on Wednesday at NASA’s Innovative Advanced Concepts symposium in Raleigh, North Carolina.

This challenge was apparent when the little Philae lander bounced when it finally landed on its comet. And these landers carry a lot of very expensive equipment that can easily end up bounced-around and smashed just from trying to make it on the surface.

Enter the space glider: a spacecraft that floats on the electrostatic charges that make your hair stand on end when you touch a balloon. Quadrelli’s team presented this crazy-sounding solution based on how spiders travel using little balloons of charged spider silk based on the fact that asteroids become electrostatically charged from the sun — like a balloon does in response to friction.

Using these charges, a glider with thin, charged appendages could float to travel around. Once it saw a good place to land it could drift down and grab hold.

Although they are still in the concept stages, a space glider that would revolutionize how NASA would approach things like the asteroid recovery mission.

Spacecraft could get close enough to comets and asteroids to collect samples without wrecking million dollar investments. And since these space rocks are suspected to hold important clues about the formation of the solar system and habitable planets, it’s important to find a better way to reach them.

More like this
Science
5.10.2022 12:00 PM
NASA images reveal a man-made scar in the Amazon so big you can see it from space
By Pritam Das, Faisal Hossain, Hörður Bragi Helgason, Shahzaib Khan and The Conversation
Science
6 hours ago
NASA announces the end of its Marsquake-hunting lander
By Doris Elín Urrutia
Science
5.14.2022 1:00 PM
NASA's ailing Mars lander captures the biggest Marsquake yet
By Jeff Nagle
Related Tags
Share: