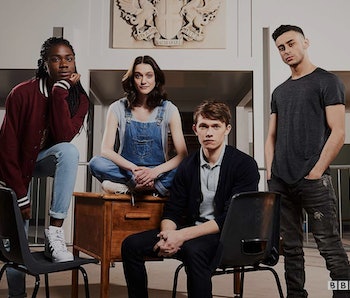 This fall, Whovians will have another inlet into the world of the Doctor when Doctor Who spin-off, Class, airs on BBC3.

The series follows the students and teachers at Coal Hill School, an institution with which fans of the long-running science fiction series should be intimately familiar. Class will follow four students at the school played by Greg Austin, Fady Elsayed, Sophie Hopkins and Vivian Oparah. According to the official synopsis, these students will be forced to deal with the issues that arise from tampering with the space-time continuum (aka timey-wimey stuff).

Coal Hill School dates back to the 1963 pilot episode, “An Unearthly Child” in which the First Doctor’s granddaughter is actually attending the school on the sly while her grandad repairs their busted time machine. In fact, two of the teachers from Coal Hill act as the First Doctor’s companions. From there, Coal Hill has continued to pop up throughout the run of Doctor Who. Popular companion Clara Oswald was once a teacher there (before that whole Trap Street debacle), and the Doctor himself has spent a few episodes hanging around the grounds, too.

Don’t expect a straight Torchwood knock-off, though. Showrunner Patrick Ness explained that his focus is less on the Doctor’s antics, and more about the real people who are left holding the bag when the good Doctor jets off to another adventure. That assertion coupled with the fact that the core cast are teenagers indicates that this entry point into the universe of Doctor Who will be a bit more Zach Morris and a little less Jack Harkness.

How do a bunch of teens handle an intergalactic, time-fudging mess? We’ll find out in October.

More like this
Entertainment
8.1.2022 2:00 AM
Westworld Season 4 just copied one of the best Doctor Who episodes ever
By Ryan Britt
Entertainment
8.9.2022 1:00 PM
Has your favorite HBO Max show been canceled? The fate of 9 sci-fi series revealed
By Robin Bea
Culture
8.3.2022 9:00 AM
7 amazing sci-fi shows and movies coming to HBO Max in August 2022
By Robin Bea
Related Tags
Share: