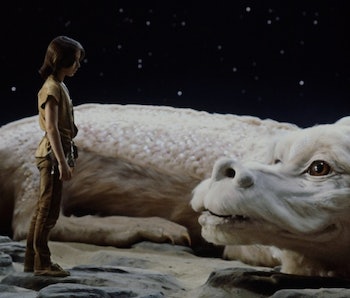 If it’s been too long since you envisioned yourself riding on Falkor’s back, then you’re in luck: the 1984 beloved fantasy film The NeverEnding Story is returning to movie theaters in the United States for a limited run in September.

Fathom Events is coordinating the iconic film’s re-release, and will include a special short featurette called Reimagine the NeverEnding Story before every screening. A full list of the screenings are available from Fathom right here. Note: some eagle-eyed fans noticed their movie theater’s listings didn’t include the screenings – but they are are indeed happening.

Presumably, there’s at least one generation who has never seen The NeverEnding Story in a theatre, and perhaps a whole group of people who haven’t seen it at all. In the age of reboots and re-imaginings, this one hasn’t been touched by big studios, yet. And that’s probably because there’s no way to improve on the design of the flying fluffy dog/dragon, Falkor.

Still, it’s probably a good idea to run out and catch The NeverEnding Story in the theater next month and preserve your memories of Falkor, Atreyu, and Bastian Balthazar Bux forever.