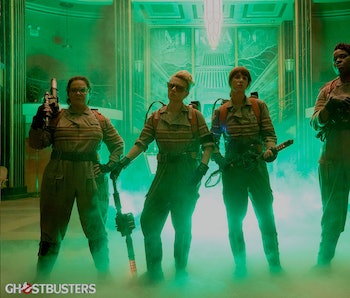 As the release of the new Ghostbusters reboot draws near, the internet is still throwing its sexist tantrums and self-righteous hissy fits on behalf of “childhoods” everywhere. But Ghostbusters has the potential to be really great, and at the very least, will break the glass ceiling that has kept major franchises from focusing on female characters.

Following Ghostbusters lead of putting women and female characters at the forefront of some of our favorite stories, here are five more films and franchises that should consider female reboots and installments.

Sure, we’ll have to do a little given name changing, but it’s a worthy cause. And yeah, we get that she’s really busy, but we can scarcely dream up anything more deserving of a place on the big screen than Gillian Anderson driving around in an Aston Martin and casually taking out the world’s biggest bads.

And if Gillian is too busy, there are plenty of other great options. And no, it doesn’t mean we have to lose the Bond girls.

Don’t even attempt to make the “Tomb Raider did this already” argument, because it’s a truth universally acknowledged that the supply for adventurous female archeologists uncovering the mysteries and secrets of the world isn’t even close to touching the demand. And for what it’s worth, Megan Fox seems pretty interested.

Sure, we’re getting a 21 Jump Street/MIB crossover film, but let’s not pretend that it means there isn’t room for a WIB film. A long-time expert alien hunter and her rookie-in-training dressing well and keeping Earth safe from all manner of sludgy, slimy, wiry and weird alien life? This is the reboot the world deserves.

If you say that you don’t want to see a bunch of very smart and talented women pull of a heist in really beautiful clothing, you’re lying and we both know it.

Goose and Maverick aren’t even gender specific names. The thing practically writes itself.