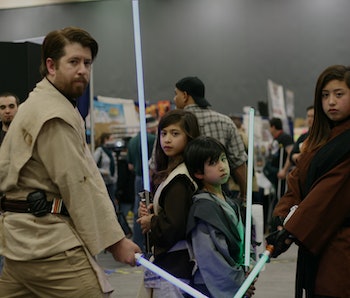 Dr. Benjamin N. Judkins has a very unique field of study: Lightsaber combat through the lens of martial arts. Specifically, Dr. Judkins examines the way that the Star Wars-inspired technique fits into the larger martial arts community and the pop culture paradigm that surrounds martial arts.

Inverse spoke with Judkins to learn more about his research, what might be the first martial art derived from and inspired by a fictional universe we all know and love.

Is lightsaber combat a martial art?

It depends on what you mean by “martial art.” As a somewhat contested term, we’re still working out our definitions. When you talk to actual martial artists, there isn’t a lot of agreement among them as to what constitutes a martial art.

But lightsaber combat itself can be a lot of things. Some people look at it and they treat it as a type of cosplay. Some people are very much into theatrical performance. But there are other lightsaber groups that are working quite hard at taking techniques from traditional martial arts and adapting them to the use of stunt sabers and then creating pretty rigorous martial art systems around that. I think you’d have to look what a group like Ludosport is doing and say, ‘Yeah, that’s as much a martial art as anything you’ll find out there right now.’

What makes something a martial art?

So in that very simple definition, you look at lightsaber combat and what we have is clearly social. In terms of fighting, the issue that we have is that, of course, the weapon is not real. So can you have a martial art with a weapon that is not real? I call it a “hyperreal martial art” that everyone acknowledges is based on a fictional setting.

But a one-inch polycarbonate heavy-grade blade is heavy. That thing hurts when you get whacked with it, so you certainly have an incentive in sparring to act as though it’s real. You don’t want to get hit with it.

A 36-inch heavy polycarbonate blade can smack with a lot of force. When you actually start to spar, when you start to compete with them, you really need to be aware of what the rules of engagement are in a given situation, and you need to understand that there’s going to be safety equipment and you need to actually invest in that safety equipment. That makes it pretty much identical to any other weapon you’d use in training.

Generally speaking, the hilts of most of the replica or stunt sabers that people are using now are anywhere from 8-12” long, they’re made out of aluminum, they’re anywhere from an 1.25-1.5” in diameter, they have heavy polycarbonate blades in them so when you’re using them as a martial arts weapon you can hit them against things and they don’t break. They’re actually pretty rigid, pretty resilient.

Then, inside the hilts themselves, there are LEDs that you use to illuminate the blade in whatever colors that you choose. And for some of the more expensive lightsabers, people will put in sound and lighting effects. You can make these things as complex and realistic as you want.

How do people practice and compete in lightsaber combat?

What you see is either people adapting pre-existing martial arts to use the lightsabers — the lightsabers are nice because they’re very, very simple, mostly cylindrical weapons, so they adapt very easily to a lot of different styles — or, there are some groups that are actually drawing from a much wider range of arts. They’re looking at Japanese sword arts, Filipino sword arts, Chinese sword arts, Western fencing…and they are trying to draw out a body of techniques that can match the mythological discussion and portrayal of lightsaber fencing in the Star Wars fictional universe, and for them, that’s really the challenge.

Does lightsaber combat share similarities with other martial arts?

When you look at what George Lucas is attempting to do with lightsabers, he’s drawing on Samurai sword films right from the very beginning with Star Wars. So a lot of the aesthetics that went into lightsabers from the beginning came out of Kendo. You don’t have to look Obi-Wan Kenobi and Qui-Gon Jinn very hard and you can see Samurai-esque characteristics in these guys.

Is there development in lightsaber combat as a sport and as a community?

A lot of the very first groups focused on costuming and theatrical performance. Stagecraft or staged performance, which is actually quite difficult. Probably the biggest and most important of the early groups, certainly the first one to get any national/international press, was one called New York Jedi in New York City.

These guys would develop a persona through cosplay and put on public performances. I think that was the initial model that was successful. Then as that establishes itself, other people look at it and say, “Yeah, this is really interesting, but what we actually want to see is something more like a combat sport.” Then other people look at that and say, ‘Well, this is really cool but what I want to do is I want to explore the martial arts aspect of it.