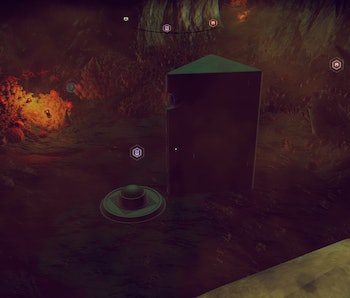 After learning of No Man’s Sky, I immediately began making comparisons to my previous journeys through video game space. But, the game isn’t like Elite Dangerous, Rebel Galaxy, or the slew of Star Wars titles I played as a kid. It’s actually most like EVE Online.

EVE Online is a gigantic MMO set in space. Made by CCP, it invites players to openly explore, fight and trade their way through thousands of star systems with other pilots. Like any MMO, EVE was an extremely intimidating experience from the beginning – one during which players who had numerous advantages on me dominated my every move in the deeper sectors of space. No matter what sort of path I attempted to take I was consistently punished by better players, which eventually forced me to adhere to a specific progression path established by those before me.

This path became my checklist, forcing me to purchase a particular type of ship and equip it with a specific load-out in order to remain relevant. I would then proceed to upgrade it a certain amount of times before trashing it for the next one on my list, which drove me to quit the game for quite some time. I wanted to enjoy and experience what it had to offer, but EVE limited my freedom and that was something I didn’t want to engage in.

At its very core, No Man’s Sky follows the same basic gameplay loops present in EVE. You collect resources and currency you then use to upgrade your equipment and purchase better starships. The only difference? No Man’s Sky doesn’t force you to follow a set path since it separates players across vast distances.

While a more ingrained multiplayer element was something many wanted, I was content with being alone in the vast universe of No Man’s Sky because it didn’t force me to adhere to a specific style of play. I didn’t have to purchase a specific ship or proceed through a specific progression path like I did in EVE, I was just able to play without a care – which created an excellent sense of bliss, which is what makes No Man’s Sky so damn special.

When exploring the vast universe of the game, players never feel pressured to follow a set path by those laid out previously. There’s no optimal way to explore the 18.7 quintillion planets of No Mans Sky, although there are certainly specific paths players can follow should they choose. It creates an endless cap on player freedom in a way so few ever manage to pull off.

This sense of freedom is core to the great gameplay experience offered with open-world titles, especially those set in the infinite vastness of space. Just like life, there’s not a specific checklist that everyone has to follow. There’s just the sense of figuring things out on your own – and that’s what’s going to keep pulling us back into the world of No Man’s Sky for years to come.

More like this
Gaming
Jan. 29, 2023
You need to play the most hardcore sci-fi platformer ASAP
By David Grossman
Gaming
Jan. 25, 2023
Redfall is Bethesda’s vampire-infested co-op shooter — what to know
By Jess Reyes
Entertainment
Feb. 4, 2023
The Last of Us Episode 4 trailer teases the entrance of Melanie Lynskey’s character
By Claire Fox
LEARN SOMETHING NEW EVERY DAY.
Related Tags
Share: