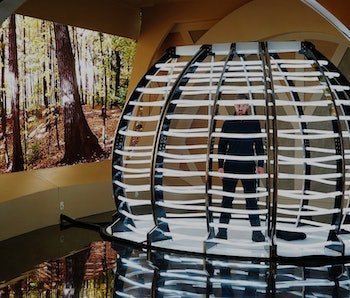 Things are going from bad to extremely bad on Westerley in this week’s Killjoys, and it looks like the rest of the Quad might not be far behind. We started this season of Killjoys in the shit, with a wall around Old Town and a Delle Seyah shake-up, but things are headed downhill rapidly in “Full Metal Monk.”

Johnny’s on the outs with D’av and Dutch, who finally found out about his side quests with Pawter, so when Dutch finds him in a prison hamster ball in Spring Hill, she kind of tells him to tough it out until Pawter can get there and use her Qreshi royalty status to get him out. D’av’s just as unhappy about Johnny’s secret-keeping and opts to lend a hand in Dutch’s quest to unravel this Twin Dutch plot and let Johnny save his own ass.

They make their way to Leith to talk to Olan, which proves difficult because he’s sort of being driven mad by the massive data dump in his head, courtesy of Khlyen. Still, he provides them with a bunch of cryptic symbols that turns out to be a map and matches some of markings on the strip of skin that Alvis cut from the monk in the mine a few episodes ago and is now using as a bookmark because he’s a normal and very well-adjusted dude.

The map leads them to Arkyn and, more specifically, to the location of one of the rivers that used to be on Arkyn. Though the river’s long gone, they do find one of the mysterious mirrored boxes like the one Dutch found on Leith last week. She works her magic and gets them inside, which seems fine and great until the thing drops like the elevator in Tower of Terror and lands them in some kind of long-abandoned secret base. That’s full of bodies. Because of course it is.

It’s also home to a monk that’s been locked up there for hundreds of years behind a wall that’s not totally dissimilar to the one on Westerley.

When Pawter at Spring Hill and uses a little good old fashioned leverage to spring Johnny, she immediately enlists his help with finding a toxin she suspects is going to kill a lot of people in Old Town before her meet with her only Nine ally, Arune Hyponia (Shamier Anderson). They test everything they can think of: blood, soil, water, air, and food, and ultimately come up empty, save for a lead on some special Company rations that are supposed to be making their way inside the wall. Also, Pree sings and it’s great because Thom Allison has a voice like a damn angel.

Whilet they’re in the middle of developing a plan to intercept the rations, though, they start acting a little odd. Giddy, even. Considering they’re trying to take down an evil megacorp, giddy seems a touch out of place. When Arune shows up, he sees it immediately, but their conversation and any attempt at a plan of action is cut short when Jelco shows up and confirms what we suspected: Johnny and Pawter have been drugged. Sort of.

Turns out that the second wall that Jelco’s activated at Delle Seyah’s insistence is taking effect, and it’s making everyone in Old Town happy and complacent. Just how complacent? Jelco demonstrates by shooting Arune and looks on as Johnny and Pawter — an incredibly skilled doctor, mind you — stand by and watch helplessly as he dies. Then, in true Scumbag Jelco fashion, he takes a picture of Pawter and Johnny next to the body for leverage of his own.

On Arkyn, Dutch, D’av and Alvis free the monk, who immediately tries to kill Dutch because she looks exactly like “the devil.” They restrain him and get what they can in the way of answers before he begs them to kill him. After hundreds of years of sitting behind that wall, he wants to die, and D’av points out that he’s the one who gets to decide how much pain is too much. Alvis gives him last rites and Dutch grants his wish.

In Old Town, things have gone from the “really bad with the promise of worse things to come” to “downright dystopian nightmare.” People are dancing on shards of glass in the street and jumping from buildings, breaking their bones so thoroughly that they jut out of their bodies at odd angles. And the entire time, everyone’s just smiling because they’re high on the wall’s happy juice. It’s a horrific, surreal sight as Johnny walk around the pain and destruction hand in hand and grinning just like everyone else, the thought of helping not even occurring to them.

It was always a cinch that the Company’s endgame was going to be next-level dastardly, but I have to say that the Jolly Wall is beyond what I expected. In a good way! When shows are at their best, you go into them feeling like you can always trust the team behind them to give you a story worth following. Killjoys continues to deliver, one-upping last season and consistently hitting the right marks when it comes to pace, tone, and plot.

There’s a lot going on and the last two episodes are likely going to be jam-packed with the bevy of conflicts. The fight in Killjoys is so much bigger than it was last season, and while that has us moving through story at breakneck speeds, it also ensures that there’s never much in the way of filler. The storytelling is deeply clever and economical, and the vast majority of episodes are wall-to-wall, telling a lot of story in an hour without suffering much in the way of drag.

Killjoys is still one of the most fun shows to watch on TV, but it’s proving with increasing frequency that it can bring serious thematic elements into the fold without losing its identity in the process. That’s a pretty impressive feat, and we’ve seen plenty of shows fail in their attempts to get bigger and better in their second seasons. We’re eager to see what the last two episodes of the season hold, but so far, Killjoys has proven that if it’s good, weird, fun, sci-fi we’re looking for, it’s perfectly willing to serve it up.