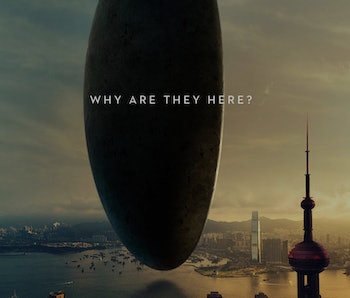 The trailer for director Denis Villeneuve’s new film Arrival made the internet buzz with excitment, but a newly released poster is having the opposite effect for people in China and Hong Kong.

The film’s post-trailer social media blitz involved 12 individual posters. Each is based on locations all over the world where the alien spacecraft land in the new film, which stars Amy Adams and Jeremy Renner as scientists trying to interpret the aliens’ language to defer all out war. But the poster depicting one of the hopefully benevolent alien pods levitating over Hong Kong’s Victoria Harbor includes one particular detail that shouldn’t be there.

It seems some poor marketing employee took the Hong Kong skyline to be the wrong Asian location and photoshopped Shanghai’s Oriental Pearl Tower alongside the alien ship. Whoopsies.

Spot the mismatched building on the lower right corner of the poster below:

The blunder took the film’s “Why Are They Here?” tagline to an ironic level, and considering Hong Kong is over 700 miles away from Shanghai, it’s a big no-no that should have easily been recognized. But it’s also stirring up some other more serious controversy.

Just in case you need a bit of a history lesson about a ridiculously complicated socio-political situation, Hong Kong was previously a British colony that only just gained its sovereignty from the United Kingdom in 1997. Since then it’s had a contentious political relationship with the Chinese mainland over its independence from China altogether.

People took to the film’s now-deleted Facebook page featuring the poster to leave angry comments with hashtags like #HongKongIsNotChina and #WhyOrientalPearlTowerHere and to criticize the oversight.

Who knows if this hiccup over a bad photoshopping job will hurt the film’s international box office, but one thing is for sure: The movie is all about what it takes for human beings to decline into squabbles and conflict in the face of an alien invasion. There didn’t need to be weird alien pods landing everywhere — only a bit of geographical ignorance — to make people super upset.