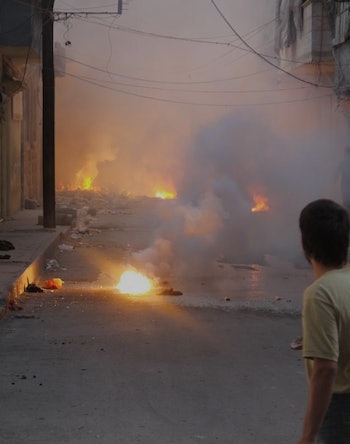 Add one more horror to the list of nightmares facing Syrian civilians: the increasing use of incendiary weapons by joint Syria-Russian forces.

A new report from Human Rights Watch documented 18 uses of incendiary weapons by either Russian or Syrian forces against anti-government rebels and civilians in the last nine weeks, a conservative estimate of the number of times the controversial weapons have likely been used.

The civil war in Syria has now gone on for more than five years, and faltering peace talks between the United States, Russia, and regional partners seem to offer little hope to end the violence. In April, the United Nations special envoy to Syria estimated that 400,000 people had been killed since the fighting began. Millions have been displaced internally or have fled the country.

Anti-regime rebels hold the eastern part of Aleppo City and Idlib, and have regularly been subject to siege and starvation tactics, crude barrel bombs dropped out of regime helicopters, and chemical attacks. With Russia’s involvement over the last year has come the new horror of incendiary weapons.

The weapons, which Human Rights Watch verified through photographs and video evidence, were manufactured decades ago in Russia at the height of the Cold War. “The incendiary weapons used in Syria since 2012 are air-delivered and were made in the Soviet Union at state factories in the 1970s and 1980s,” Wareham tells Inverse. “Incendiary weapons are controversial for a reason, which is the cruel and unnecessary harm inflicted on their victims.”

The bombs, which burn humans and infrastructure alike, are comprised of a shell that contains flammable submunitions. The Soviet-era cluster bomb RBK-500 ZAB-2.5SM bombs — an incendiary weapon that delivers 117 ZAB-2.5SM incendiary submunitions — is being used, Human Rights Watch learned from observations of the war zone. Each one burns for up to 10 minutes and they start fires that very hard to extinguish. They create hell on Earth because they are literal fireballs that rain from the sky. Here’s how, per the report:

ZAB-series bombs contain a substance believed to be thermite that ignites while falling, leading witnesses to describe the incendiary submunitions as fireballs. It is not napalm or white phosphorus, which are notorious flammable substances used in other incendiary weapons.

“The ZAB-2.5SM submunitions delivered by RBK-500 bombs contain a small bursting charge to ignite the flammable substance as they are released from the bomb in mid-air,” Human Rights Watch explains. “The fires started by incendiary weapons can also cause secondary explosions when they burn objects on the ground.”

Though Russia’s use of chemical weapons in Idlib and rebel-controlled parts of Aleppo is horrifying, it’s far from the only example of flammable weapons in war: The single deadliest day in the history of modern war came during World War II when the United States firebombed Tokyo, killing an estimated 87,500 people in a single day, giving the attacks the unenviable status of being deadlier than either nuclear bomb the United States detonated near the end of the war.

And perhaps the most notorious use of flammable weapons — also carried out by the United States — was immortalized in Apocalypse Now, with the line: “I love the smell of napalm in the morning.” But the Vietnam war wasn’t the last time the United States used incendiary weapons. The flammable chemical white phosphorus was used as a weapon in Iraq in 2004, after initially denying the accusations.

In 2009, Israel also white phosphorus in their attack on Gaza, to international condemnation.

The use of incendiary weapons dates back to ancient wars, in the form of flammable arrows, or, more notoriously, Greek Fire. The Byzantine Greeks used a substance that came to be known as Greek Fire with great success, beginning in the seventh century. It was a “napalm-like substance, that burned in water and could be projected great distances from the bows of ships,” writes the historian Alex Roland. A similar sounding weapon appears in Game of Thrones, a highly flammable substance called “wildfire.”

The eyewitness accounts of the Russia-Syria bombing describe a hellscape of uncontrollable fire and chaos. Many of the firsthand accounts come from volunteers in the Syria Civil Defense, known colloquially as “White Helmets.” The SCD rushes to the scene of bombings, often at great personal risk. Their stories of the incendiary attacks are difficult to read, and convey just how terrifying the firebombing raids are.

“It was so bright you could see the buildings as if was daylight. It was absolutely abnormal,” one SCD volunteer told Human Rights Watch. “Honestly, words cannot describe it.”