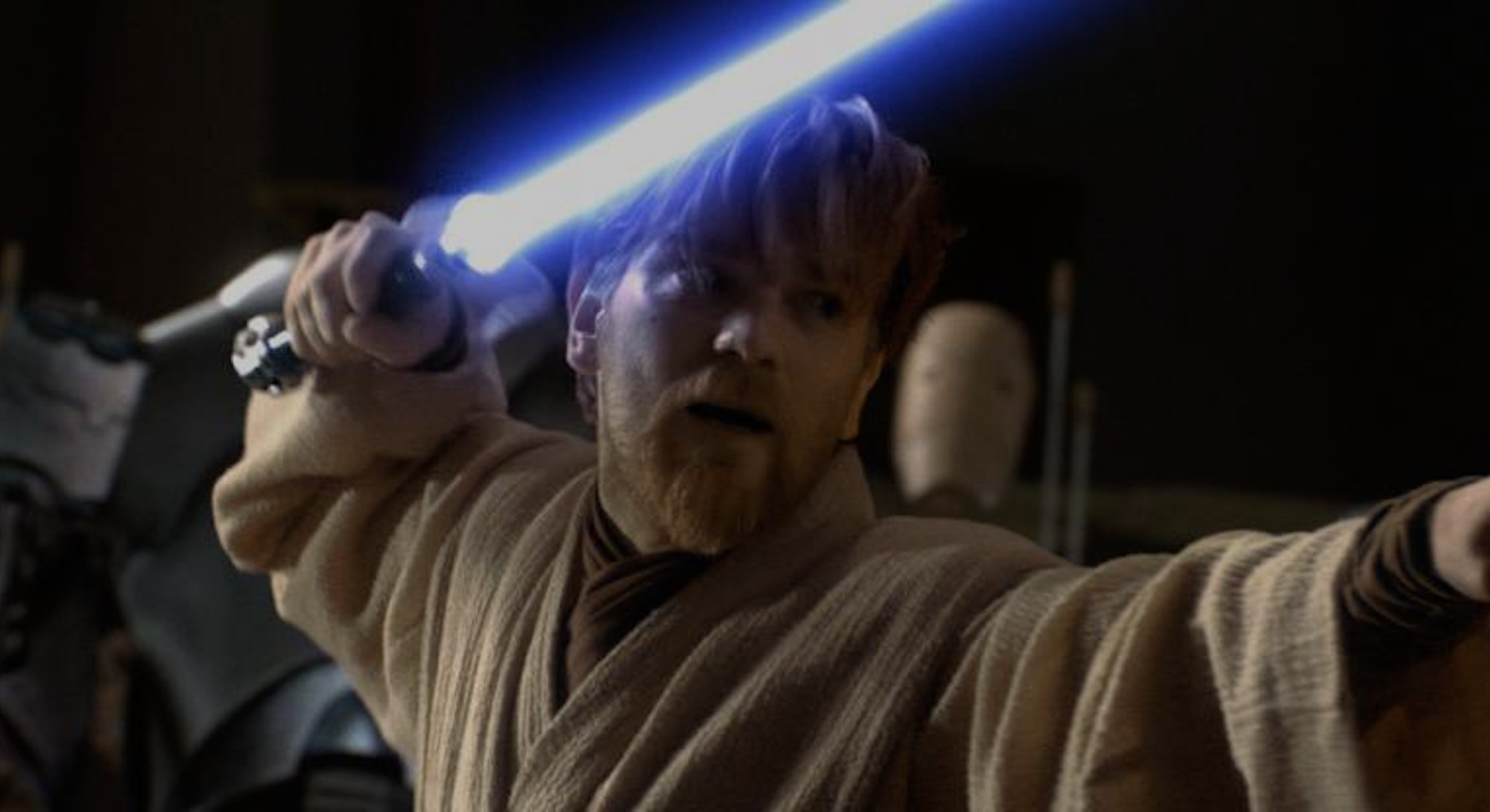 After a solid decade and a half of popular fan scorn, hating on Star Wars Episodes I-III might officially be over. As the Disney-driven Lucasfilm works to build out the galaxy far, far away with new sequels, prequels, and spinoffs, a growing number of film historians, critics, and fans are waging an intelligent battle on behalf of George Lucas’s supposed “failures” : the original prequels.

One such fan is filmmaker Bradley Weatherholt, director of the soon-to-be-released documentary The Prequels Strike Back: A Fan’s Journey, which will be released to skeptical audiences on September 14. The film carries the tagline “unlearn what you have learned,” signaling its intent to push back against the overwhelming perception that these films are terrible. The doc features input from notables like Kevin Smith, film critic Matt Singer, music journalist Doug Adams, and Mike Kilmo, author of the Star Wars “ring theory”, which asserts various complex patterns woven between the classic films and the prequels.

Back in 2015, Bradley Weatherholt asked me to appear in The Prequels Strike Back, to share my own opinions about the Star Wars prequels. Like me, Weatherholt is no stranger to having controversial opinions about Star Wars counterintuitive to those typical of most fans. Now, nearly a year after shooting a brief scene for the doc, I caught up with Weatherholt to talk about the movie and whether fans might change their minds about them.

Back in the summer of 1999, no one I was friends with hated Star Wars Episode I: The Phantom Menace. Placed against contemporary popular opinion, this memory seems incongruous with how the current zeitgeist largely regards this movie and its two subsequent sequels, Attack of the Clones and Revenge of the Sith. Sure, I wouldn’t say the films comprising the Star Wars “prequel” trilogy are great movies, and I don’t even think they accomplish the goals they set out to achieve. But the now-accepted narrative that they were universally hated by everyone instantly and therefore have no worth at all, is totally outrageous and borderline intellectually dishonest.

“So much of cultural conversation is binary: red vs blue, Republican vs Democrat, Batman v Superman,” Weatherholt told me. “But the truth is often more grey than arbitrary and discretionary factions. And if the in-between isn’t closer to the truth, it’s certainly more interesting. When we polarize the prequels, as with many other topics, we miss some really interesting conversations.”

Here, Weatherholt doesn’t suggest that all Star Wars fans should suddenly do an about-face and whole-heartedly love everything about these movies, but does believe that they should recognize there might be some interesting conversations to be had about the films that fans are missing out on through blind hate. And at the very least, a few oft-repeated untruths should be given a second look. After all, “remember who deals in absolutes” Weatherholt told me, slyly referencing the evil and villainous Sith Lords of the films.

One glaring example of myths about the prequels connects to a favorite drum-beat of the haters: the notion that the prequels were overly-reliant on computer-generated special effects and contained seemingly zero “real” effects. Pervasively, this notion of “practical effects,” versus “computer-generate effects” even invades contemporary promotion and conversation about newer Star Wars films like The Force Awakens and Rogue One. And while it’s true George Lucas employed a lot of green screen, there were still a ton of practical effects. Fon Davis – a former ILM model-maker appearing in The Prequels Strike Back – said “We actually did more miniatures on the prequels than in the original films.” Meaning, if you continue to regard the prequels as being fake movies made entirely in a computer, you’re at least half-wrong.

In terms of historical opinions of the prequels, haters are also dead-wrong about how the film was initially perceived by mainstream critics. The film review of The Phantom Menace in the New York Times was overwhelming positive in 1999, an indisputable fact which now seems to be completely inconceivable by contemporary fan culture. When I asked Weatherholt how we account for this perception gap he told me plainly, “The internet.” If an opinion is repeated enough on the internet, particularly about something with mass appeal like Star Wars, it seems inevitable that fans will start simply parroting opinions they’ve picked up from others and maybe in fact, not even be forming their own opinions. As Matt Singer says in the documentary, “Nobody hates Star Wars like a Star Wars fan.”

“In many ways the internet is the villain of our documentary,” Weatherholt explained, “Politics or prequels, the psychology of parroting on the internet is the same…and interestingly, the critical opinion actually works in reverse for the original trilogy. Many contemporaries panned Star Wars and Empire. It was only after they were a sensation that everyone claimed to have always loved them.”

So, you might hate the prequels because your friends do, but if that’s true, what are the specific good things fans and pundits are missing?

“The theme of descending conveyed both visually and narratively,” Weatherholt said. This notion highlights the idea that the story of Anakin’s descent from being a heroic person into the worst person of all time was not something that was easy to convey in these movies. Argumentatively, a fan could make the case that we never needed to see Anakin turn to the dark side in the first place, that it was better as a backstory than a series of detailed films. And yet, the films exist, and if you were to rewatch Revenge of the Sith right now, you’d find perhaps not a great film, but a very, very creative and totally risky one. The story of Anakin Skywalker was never going to be as uplifting and awe-inspiring as the story of his son Luke, in the original films. Anakin is a messy, psychologically complex person, and the films he inhabits are equally messy. In the documentary, Professor Anne Lancashire of the University of Toronto says this of the prequels; “You start looking for psychological meaning, you start looking for symbolism…and once you start looking for it, it’s everywhere.”

Still, to be fair to the haters, the Star Wars prequels might not make it easy on the casual viewer. “I think more so than anything, the films have a staggering amount of nuance that is often ignored,” Weatherholt told me, “Which is totally understandable given the clash between the lofty mythological symbolism and absurd characters like Jar Jar.”

Artistically speaking, George Lucas has been praised for his innovation and creativity on the original Star Wars films, but this praise rarely extends to the prequels. And yet, illuminating contrarian opinion which praises Lucas’s creativity on the prequels has been brewing in critical circles for awhile now. In the Chronicle of Higher Education in 2012, Camille Paglia declared George Lucas “the greatest artist of our time,” and specifically cited the final duel between Obi-Wan Kenobi and Anakin Skywalker in Revenge of the Sith as proof, writing “As in Dante, there is an allegorical level: “I have the high ground,” declares Obi-Wan when he springs to the top of a black sandy slope. Hell, as in Marlowe, Milton, and Blake, is a psychological state—Anakin’s self-destructive surrender to possessive love and jealous hate.”

Again, the overt darkness and unsatisfactory narrative components of Anakin’s fall – as told by the prequels – was never bound for universal love, even if George Lucas had executed all the other aesthetics perfectly. While it might be a little extreme to chastise the new crop of Star Wars films for being derivative and pandering to fan-wishes, there can be zero doubt that the prequel films were all artistically more pure pieces of expression than The Force Awakens.

“If we are to judge Revenge of the Sith in the same lens we would judge other art pictures, we wouldn’t be so quick to dismiss the film for the mechanical acting or wooden dialogue,” Weatherholt told me, calcifying the idea that perhaps the greatest curse of the Star Wars prequels is that they are seen first and foremost as Star Wars films and not movies in their own right. The craftmanship of The Force Awakens might be more precise and sturdy than the unwieldy prequels, but that doesn’t mean it’s a greater piece of art. “I think Disney treats its fans like its shareholders,” Weatherholt said, “This is to say they take the least amount of risk to cater to established interests. Balance is certainly in order, but I am much more forgiving to a complete disaster of a film with noble intentions than a safe, brainless flick.”

The Prequels Strike Back: A Fan’s Journey will release digitally on September 14, and will be screened at the Alamo Drafthouse Theatre in Austin,TX on October 6th.