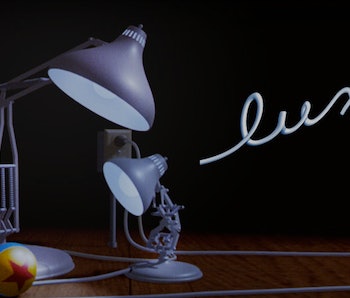 Thirty years ago today, Pixar changed the face of animation forever with its landmark short film Luxo Jr.. The groundbreaking short was simple enough: it simply featured two living Luxo LS desk lamps, one big and one smaller — junior, if you will. The film put Pixar on the map, garnering attention for its proof-of-concept demonstration of its computer animation abilities and of the potential role of computers in three-dimensional animation. Luxo Jr. was nominated for an Academy Award and was selected by the Library of Congress for preservation through the National Film Registry, an honor reserved for films of “cultural, historic or aesthetic significance.”

If you’ve ever seen a Pixar movie, you know that the animated hopping Luxo lamp went on to become an key piece of Pixar’s identity. It’s instantly recognizable and part of Pixar’s brand, and may very well be its most recognizable and iconic character.

Throughout the majority of its history since Luxo Jr., Pixar has had a good relationship with Luxo — the Norwegian company whose award-winning product inspired the film. For the most part, Luxo was happy to let Pixar use their iconic lamp’s likeness as an integral part of the studio’s aesthetic identity. But that nearly changed in 2009 when Pixar began packaging Up Blu-rays with its own “Luxo Jr.” lamps.

If there’s one thing we know about Disney, it’s that if there’s a merchandising opportunity afoot, the Mouse House is going to seize it. So, it manufactured its own balanced arm lamps (not made by Luxo) to promote the sale of the special edition Up package.

Naturally, Luxo was not pleased, and it filed a lawsuit against Disney.

The “Luxo Jr.” lamps weren’t made by Luxo, but bore their likeness and, for all intents and purposes, gave off the impression of being a Luxo lamp without actually being one. The Luxo LS design is widely recognized, and it’s sort of the balanced arm lamp, and even though Luxo doesn’t have an actual Luxo Jr. lamp model, the lawsuit was a matter of trademark infringement, as the Luxo name is a trademarked entity.

It wasn’t just the special edition lamps in the “Up” package that were the problem, though — it was also the 6-foot tall animatronic Luxo lamp in Disney parks. The claim hinged up on the fact that while Pixar had been using the Luxo lamp likeness for years, attaching the Luxo name to real-world products was an issue because it suggested Luxo involvement or alluded to Luxo quality in a real product where there was none.

Luxo and Disney settled the lawsuit outside of the courtroom, and Pixar still uses Luxo Jr. as a part of its brand identity. But you won’t see Disney selling them anytime soon.

More like this
Entertainment
6.22.2022 11:00 AM
20 years ago, Disney's most chaotic sci-fi experiment ever paid off
By Rebecca Long
Entertainment
7.3.2022 2:00 PM
How Marcel the Shell invented "never been done before” stop-motion
By Eric Francisco
Science
6.24.2022 1:30 PM
The best post-apocalypse movie of the century reveals a dark debate over humanity’s future
By Tara Yarlagadda
Share: