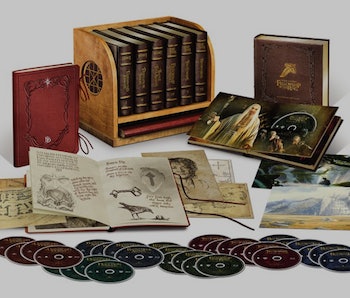 Lord of the Rings fans are notoriously hard to satisfy, but if the forthcoming $800 Ultimate Edition Box Set doesn’t do it for them, there is nothing on the planet that will.

A half-formed Amazon posting that snuck onto the web this morning has a listing for a complete collection of filmmaker Peter Jackson’s entire Middle Earth saga, complete with the entire extended edition LotR and Hobbit trilogies on Blu-Ray discs – with all of the special features, director’s commentary, and other stuff they could cram onto a special wooden shelf. The listing promises 30 — 30! — discs of content, including the extended cuts for all six films that will be housed in faux leather books on a collectible “Hobbit-style wood shelf from a design selected by Peter Jackson.”

The “Middle Earth Limited Collector’s Edition” should hit shelves on October 4th, if the post is accurate. It’s a single package that would make even Sauron weak in the knees.

Feast your eyes on the whole shebang right here:

A separate 6-film set for the theatrical versions will also be released as well, which you can see here:

As for the other goodies, the set features the ridiculously thorough behind-the- scenes supplements for each film from past edition Blu-ray releases, while the theatrical edition supplements will be on DVDs.

Besides having the entire Middle Earth extravaganza in one set for the first time, you also get a 100-page recreation of The Red Book of Westmarch, the diegetic book supposedly written by Bilbo and Frodo Baggins about their adventures to Mordor and back. It features original film sketches, new artwork, and framable recreations of watercolors by artists Alan Lee and John Howe, whose work Jackson used to create the look of the films.

It all sounds great, right? Well, that depends on how much you’re willing to pony up for whatever a “Hobbit-style” shelf is. The price point for the set disappeared from the Amazon listing, and could possibly be a placeholder, but the “Limited Collector’s Edition” will most likely set you back $800.

That is a very pretty penny, and considering you could get the same content for all six films in separate sets sets (minus the fake leather-bound books and the shelf) for $125 it might all be a bit suspect. Call us cheap, but we’d have to do some soul searching to convince ourselves the extra $675 is worth it.

Are overly elaborate but highly sought-after box sets like this the death knell of physical media? Maybe if they cost this much, but damn does this thing look gorgeous. Hopefully it goes on sale around Christmas.

More like this
Entertainment
5.13.2022 10:00 AM
Upload renewed for Season 3. How much longer can Amazon’s best show last?
By Eric Francisco
Entertainment
5.22.2022 11:31 AM
You need to watch the most-underrated monster franchise on Hulu before it leaves next week
By Dais Johnston
Entertainment
5.20.2022 7:41 PM
Men ending explained: How Attack on Titan inspired Alex Garland's new movie
By Jake Kleinman
Related Tags
Share: