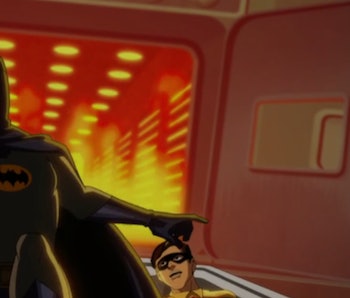 Ben Affleck and Kevin Conroy aren’t the only Batmen in town: Adam West is reprising the cowl in an all-new animated Batman film, Batman: Return of the Caped Crusaders.

West returns for a new adventure as the same Batman from the beloved, 1966 live-action television show. He’s joined by Burt Ward who will once again play Robin, and Julie Newmar who starred as Catwoman for two seasons on the TV series. Entertainment Weekly released a video teaser for the film that features West and Ward in character as they cheekily explain the premise of Return of the Caped Crusaders to audiences, all while strapped to a deadly microwave dinner death trap. It is as every bit fun, campy, and irreverent as the original ‘66 Batman series.

While not a trailer for the actual film per se, the video reveals that the dynamic duo will face off against villains like Joker, Riddler, Penguin, and Catwoman, all in their classic incarnations. Apparently they’ll also be fighting in space at some point, because why not?

This film looks to be one of the most original things DC Entertainment will be putting out this year, despite being based on a show over 50 years old. West and Ward clearly still own their roles as Batman and Robin, and even update some of the lingo for modern audiences (“Holy spoiler alert, Batman!”). Let’s just hope shark repellent makes a triumphant return too.