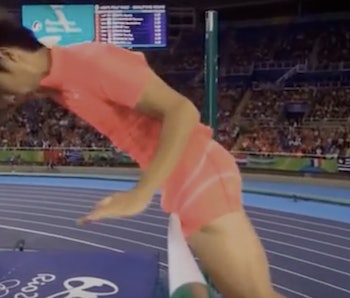 Nobody should feel bad for Hiroki Ogita. The Japanese pole vaulter rose to notoriety at the Rio Olympics as his penis proved to be too big for its own good, knocking the bar off its stand with its considerable unharnessed length. If there is one way to lose at the Olympics, this is it.

But perhaps Ogita could have avoided the literal cock block altogether by taking some pointers from the science world, which has a long history of refining objects to become maximally aerodynamic. Think about it: What do the fastest rockets, planes, and cars have in common? They are all unadorned, lacking physical accoutrements; they are designed to be superlatively sleek. In other words, none of them have anything remotely approximating a huge dick. (Ironically, the phallus shape is itself quite aerodynamic.)

Now consider pole vaulting: The sport involves shooting a human into the air by transforming the kinetic energy harnessed during a rapid sprint into gravitational potential energy — essentially, height — using a flexible pole as an intermediate tool. The best pole vaulters maintain rigidity through their bodies throughout the swing-up, extension, turn, and fly-away, the idea being that tight, long, compact things move more efficiently than things with their junk flopping about.

Where Ogita failed, ultimately, was during the turn, in which he turned 180 degrees so that his body was facing the pole. Ideally, the vaulter stays vertical during this step — again, an attempt to reach maximum height — but Ogita, failing to achieve the altitude he needed to clear the bar, curled around it instead. The tops of his thighs grazed first, paving the way for his unbridled penis to snag on the unrelenting bar.

Of course, Ogita would have avoided his crotch-crushing mishap if he’d vaulted higher altogether. Did the drag on his unfettered penis prevent him from reaching his maximum height? Perhaps; it’s hard to say for sure. Still, thinking like a scientist and prioritizing aerodynamics — honestly, if you’re that well endowed, why wouldn’t you tuck it in? — would have saved him from a considerable dose of pain and an even bigger wallop of embarrassment.

That said, there are worse ways to go down in Olympic history.

More like this
Science
8.17.2022 6:45 PM
Physicists discover a mind-bending puzzle about protons at the quantum level
By Charles Q. Choi
Science
8.12.2022 12:30 PM
Astronomers pinpoint the source of a mysterious cosmic particle
By Kiona Smith
Science
8.6.2022 5:00 PM
Earth is spinning too fast — the consequences for timekeeping may be unprecedented
By Andrew Moseman
Related Tags
Share: