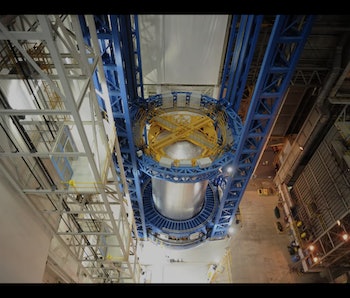 Rocket science is so complex it’s become a cliche, but building the components of NASA’s biggest spacecraft mostly comes down to a whole lot of welding. In real time, constructing the biggest part of NASA’s new Space Launch System takes weeks, but the agency has sped the whole process up into a 60-second timelapse video. You can watch the rocket’s gigantic fuel tank, a 130-foot metal cylinder that has to be welded together well enough to hold thousands of gallons of liquid hydrogen and survive the turbulence of launching a massive payload into space, take shape at lightning speed.

The main tank holds 537,000 gallons of chilled liquid hydrogen, which will feed into four RS-25 engines that will launch the rocket’s first stage into the air. The engines aren’t attached yet, but just looking at the construction at NASA’s Michoud Assembly Facility in New Orleans can give you a sense of just how enormous the whole thing is. It has to be big — it’s meant to deliver NASA’s Orion spacecraft out of the Earth’s gravitational pull. And since Orion is the craft that might take humans to Mars, we’re hoping the SLS works out well.

It’s a pretty incredible sight — the rocket’s giant fuel tank seems to materialize almost instantly as cranes and scaffolding shuffle around its exterior. Bonus points for NASA’s way-too-intense metal/dubstep soundtrack, which makes the whole thing sound like the trailer for a new God of War game or something.

After its construction, the tank will move to NASA’s Marshall Space Flight Center in Huntsville, Alabama, for more testing (to make sure it doesn’t fall apart during flight, essentially). So far, it looks pretty good.

More like this
Science
5.9.2022 8:30 PM
Crew-3 Splashdown: Watch SpaceX’s Crew Dragon Endurance splash into the Gulf of Mexico
By Jennifer Walter
Science
5.18.2022 3:00 PM
70 years ago, the world united for a monumental scientific project — and kicked off the Space Race
By Doris Elín Urrutia
Science
5.20.2022 11:15 AM
Voyager 1 is sending bizarre, glitchy signals back to NASA
By Doris Elín Urrutia
Related Tags
Share: