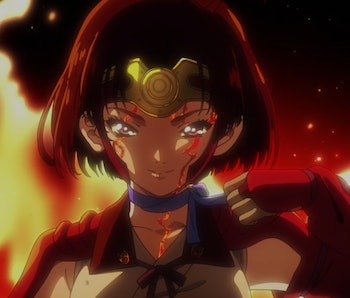 There really aren’t that many video games — well, good ones, anyway — based on anime. We get the Gundam and Dragon Ball Z games relatively regularly with a smattering of other releases. The latter includes the newest Attack on Titan video game, which appears quite good prior to release. With so many action-based anime out there, there’s a great opportunity for real cool games.

Like, say, Kabaneri of the Iron Fortress, a steampunk zombie series that trades out the top hats and suspenders for yukata and obi.

It’s very Attack on Titan-like with a main character that has a serious vendetta against monsters (the Kabane as basically zombies), a walled city to keep out the undead riffraff, and humans fighting back to reclaim, well, humanity. The anime series is also by the same animation studio and director of the giant-infested series.

Here’s why the already-popular Kabaneri of the Iron Fortress would be a great video game.

There’s obviously a story already set up, and so far there isn’t much divergence from the critical path, but considering the anime hasn’t completely finished, there’s a chance for some differing plots. And even if not, there’s still a great story to follow, with your main nerdy character becoming half-human, half-Kabane and dedicating the rest of his life to fighting the hordes of monsters that have devastated the landscape. Or heck, maybe make an entirely new Kabaneri to play with.

The Weapons Are Unique

Ikoma is an inventor. He created the bolt gun that actually kills the Kabane, so there’s a great opportunity in the game for creation. In a lot of RPGs, creating your own weapons, armor, items, and so on is a fairly common method of adding variation. Even if he’s not the main character as suggested above, having Ikoma around to straight up make stuff would be handy. Just spit-balling here, but there could upgraded weapons for the characters and even armor for the trains.

Even the Enemies Are Interesting and Varied

There are no shortage on enemies in the series, so there would be plenty for players to dismember and destroy. There are the individual zombies with glowing hearts, of course, but there’s room for a nice boss battle when they form together to create a giant crawling mass that’s as destructive as it is disgusting.

And as is commonly the case with zombie fare, humanity is the real threat. The Kabane can be mostly avoided, though they are always present. It’s the dark of heart and ambitious that must really be watched. And really, isn’t that the recipe behind the best kind of art?

More like this
Gaming
Jan. 18, 2023
NieR anime Episode 2 takes bigger risks than The Last of Us premiere
By Willa Rowe
Gaming
Feb. 1, 2023
The Best Video Game Ever Made Just Got Its Own Holiday
By Hayes Madsen
Gaming
Jan. 30, 2023
Now’s the perfect time to play The Last of Us Part II
By Willa Rowe
LEARN SOMETHING NEW EVERY DAY.
Related Tags
Share: