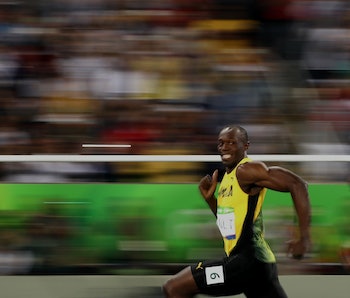 You know how trainers annoyingly tell you to envision your perfect squat before you do it, the perfect run before you go for a jog, to sit and take stock of how you’re going to find inner peace in yoga even before you even attempt a Warrior 3?

They might be on to something. In a piece for Nautilus, cognitive scientist Jim Davies gives couch potatoes blankly staring at their Olympics lineup for tonight renewed hope that maybe they’re not wasting their time. Davies says that daydreaming is a good way to get into the exercising mood. “When you imagine exercising, your breath and heart rate actually increase,” he writes. “Mental practice is one of the few effective performance-enhancing activities.”

This isn’t the first time science has suggested the best way to kickstart an exercise regimen is by imagining it. A 2014 study suggests that just imagining exercise can lead to twice as much strength as just going for it. It’s probably because your brain and body are much more connected than you think: Muscles, after all, move the way they do because your brain is constantly communicating with them.

And it’s downright powerful. Imagining your pinky is stronger leads to a 22 percent increase in strength. Actually exercising the muscles in your pinky? Thirty percent. Talk about efficiency.

That’s not to say that you can get away with just sitting around and dreaming of your rock hard bod — that, unfortunately, still requires you to hit the gym. And Davies points out that 20 minutes is really all you want to expend on dreaming of how Usain Bolt-like your run is going to be without actually, you know, running. But this does mean that admiring the athletes strutting across your screen or even Dwayne Johnson belting out a few overhead presses in the Ballers trailer can be a good literal kick in the ass to get moving.