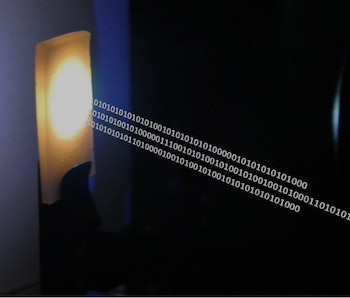 In the future, internet connectivity might come directly from your ceiling light, and it’ll be much faster than your current wifi setup.

Researchers at the King Abdullah University of Science and Technology in Saudi Arabia announced Sunday that they created an internet distribution point that uses wavelengths in the visible and near visible electromagnetic spectrum. In other words, they figured out how to beam the internet with light. The light fidelity technology, or lifi, transmits data at a staggering two gigabits per second.

The fastest transmission over wifi in the United States in the first quarter of 2016, for comparison, was a paltry 24 megabits per second.

Lifi works in a similar way to wifi, just on a different part of the electromagnetic spectrum. Wifi transmits information in a frequency regulated by the Federal Communications Commission. The regulated space for wifi is quickly filling up, however, and the FCC is racing to open up more frequency levels and unregulated frequencies. Government regulators didn’t predict the number of devices that would need access to the electromagnetic spectrum, and the growing internet of things is only going to increase device competition. That’s not to mention the public wifi being installed across places like New York City.

Lifi alleviates some of that stress. It doesn’t send information at the record six-gigabit-per-second speed, but it is a realistic technology. It gets its speed by flashing faster than the eye can see like some kind of binary Morse code. The faster the flickers, the faster the bandwidth.

It does have its downsides, though. It’s light, so it can’t travel through walls. The light also needs to be on for the data to be transmitting, although it can sink to a level outside of the range of human eyesight.

Despite its limitations, lifi could be the solution we need for our increasingly connected world.