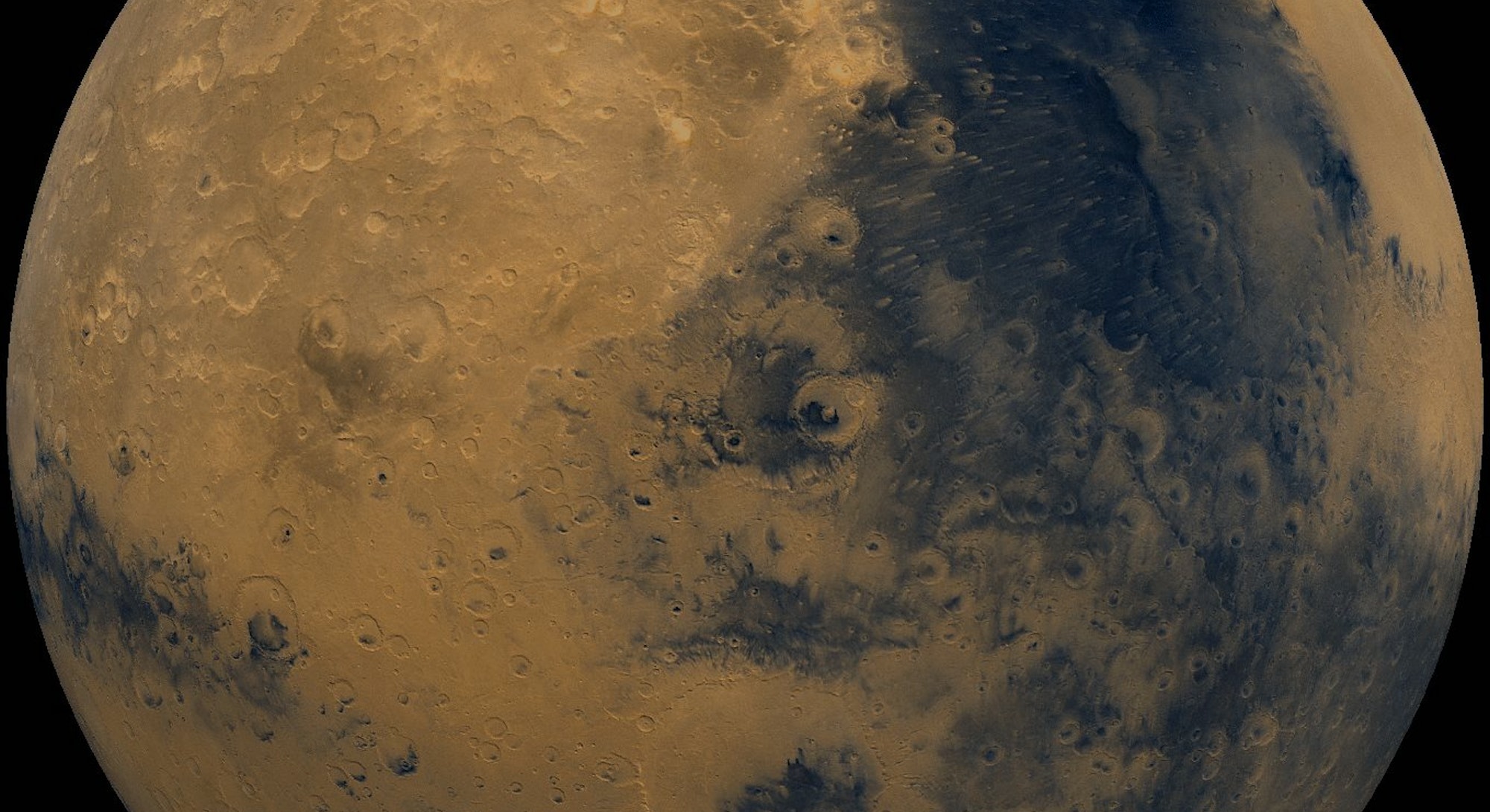 By 2025 or 2040 — depending on whether you believe SpaceX or NASA, respectively — humans will arrive on Mars. They will set up homes, live within a communal system, eat, drink, sleep, work, relax. They will see ancient Martian lakes and wind-rippled sand dunes. And they will grapple with a thought that a modern Theodore Roosevelt might have considered had he been a modern-day space cowboy: How do we not screw up Mars?

Meet Catharine Conley, the NASA Planetary Protection Officer. Her job is to make sure when humans show up on Mars, they’re not going to trample on the pristine Martian landscape.

“Planetary protection is probably the first time that humans have done that as a global species ever — look at what we can do in the future on the basis of what we have learned in the past,” she told Inverse. “Because with planetary protection policy and avoiding harmful contamination, you are understanding that you have the potential to screw up the investigation of alien life.”

It helps that people have given natural Martian protection serious thought for about 50 years. Protection agreements were signed in 1967 with the United Nations Outer Space Treaty, which essentially advises all countries going to the “moon and other celestial bodies” to conduct exploration in a way that avoids harmful contamination to both Earth and whatever other planet Earthlings were snooping around on. Ten years before the treaty, scientists were already warning of the microbes we might contaminate space with.

That remains a central concern today: Scientists understand that there is an intrinsic need to safeguard, even if they aren’t quite sure what they are protecting.

Earthlings have been messing with the terrestrial landscape of Mars since the Soviet Mars 2 probe crashed in 1971. The Viking lander missions of the 1970s, the first time the United States was able to land a spacecraft on Mars and return images of the surface, reported back information that Mars was dry, barren, and hostile to life. Mars wasn’t an appealing next home for humans.

By 2006, the Committee on Preventing the Forward Contamination of Mars had enough evidence from major missions to announce that Mars was in fact “a heterogeneous planet of multiple environments, some which might offer conditions suitable for extant or past life.” Mars wasn’t some inhospitable place, cold and barren like the Moon, an otherworldly trash can. The need to protect Mars from contamination from Earth-borne organisms had become “increasingly important.”

In 2004, astrobiologists Charles Cockell and Gerda Horneck were publishing their own plan for planetary protection — a planetary park system for Mars. They proposed seven locations on the red planet that they felt should be the first parks, describing the system as an interventionist step. They also laid out the five reasons why they thought these parks were necessary: Intrinsic work, a responsibility to future generations, to protect sites of natural beauty, utilitarian value, and historical value. Planetary parks were a way to preserve scientific heritage.

Planetary parks would have rules just as if they were Yellowstone or Yosemite. No spacecrafts or vehicles could be left within the park; no landing of an unmanned spacecraft. Robots and humans would only be allowed access on a predefined route, could not leave waste, and must be sterilized before entry.

John Rummel, formerly the chair of the Committee on Space Research as well as NASA’s Planetary Protection Officer in 1997, thinks that if we are going to envision a long-term and comfortable presence on Mars, then it’s clear that parks or other protected areas on Mars will be essential to serve our interests. Parts of Mars can serve us best just as they are, without modification and contamination.

“The most promising of those sites should be protected to protect the science that we have struggled to understand since the first time someone has looked through a telescope at Mars,” Rummel tells Inverse. “In addition, of course, sites of natural beauty or utility would be something we would not want to destroy as a part of our first introduction to our new home. Of course, if we are sharing Mars with its original life forms, we would want to know that for health reasons too.”

Today, agencies like NASA and the European Space Agency fly missions in compliance with the planetary protection standards set by COSPAR, an interdisciplinary committee of the International Council for Science. And while NASA isn’t currently working on guidelines for planetary parks per say, the idea has informed its concept of creating “special regions.” These special regions are determined as places where Earth life is more likely to survive and, by analogy, is thought to be more hospitable to life on Mars.

“Of course we have no idea whether Mars life can live anywhere on Mars, we just don’t know,” Conley says. “So special regions are defined in the context of where Earth life could survive with the expectation that Mars life could probably do pretty well there too.”

After a 2010 workshop jointly funded by NASA, COSPAR, and the ESA there was a decision to implement another standing panel, the Panel on Exploration, to consider planetary protection in context of commercial space, be it commercial asteroid mining or colony plans. Should there be environmental impact statements? Should there be special consideration for space objects? These are the things that are currently being discussed, with no clear answers yet.

Part of the reason for unclarity is that scientists understand how sites should be characterized — you can’t protect everything, so special regions will only be the places where there is considered a real chance that Earth life could grow — but right now we don’t have a sense of the numerical requirements that will constitute the chance of life. It’s expected that these requirements will be set with the astronauts actually doing the exploring on Mars and will be dependent on what their technological capabilities are.

There’s something to be said about our capability of making the best decision for the future: Frankly, we don’t know anything right now about how Mars will turn out for humans, if at all. Conley brings up the analogy of the early excavations of Egyptian tombs — some archaeologists walked away from sites, understanding that they should wait for technology to advance before jumping in.

Then there’s the question of how special region policies could even be enforced among the varying space agencies and private space companies. That’s why the planetary protection requirements put out by COSPAR currently doesn’t include provisions for historical significance: You can’t stake a claim on a planet and put a boundary around it because your country put a flag there.

The original planetary park proposal put out the idea that regions could be controlled by the United Nations or UNESCO, but Conley says that would be unlikely. The Outer Space Treaty is a legally binding document but says that it’s up to each country to decide how they will enforce the compliance of the treaty. Conley says that commercial space programs she’s spoken with, like SpaceX, understand that it’s in everyone’s best interest to follow policies that are accepted as guidelines. No one wants Gold Rush-like claim-jumping.

“The way that people often try to approach these kinds of future questions is to look at what has been done in the past,” says Conley. “The Antarctic Treaty System is one example as a treaty that could be a blueprint here. Another good example is maritime law — the law of the sea — which goes back millennia. The law of the sea is potentially one example of how we might regulate space.”

Despite any unclarity, Conley, Rummel, and Cockell all agree that it’s important that these conversations are happening now. Our own time on Earth has taught us that invasive species and a proliferation of foreign germs can be devastating. Paying attention to the cautionary tales on our planet will be what keeps us from damaging another.

“That’s why it’s so important with the commercial missions to make sure that they understand that it is to their benefit as well as to the benefit of astrobiologists to do these sort of things,” says Conley. “Of course, it’s very easy for one bad actor to screw things up.”