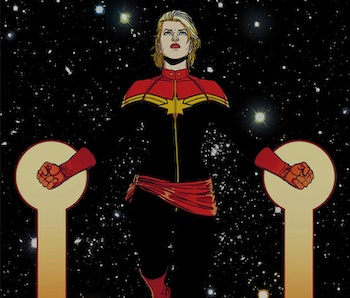 It’s pretty obvious that Brie Larson’s take on Captain Marvel will be heavily influenced by the current run on the character, but if there’s one comic from the archives that remains important to the fabric of Carol Danvers: Captain Marvel #18 from 1969. See, it’s the one where she gets her powers. Only… it’s looking like that may not be the case in the film.

A recent episode of the Any Time With Vin Forte featured Nicole Perlman, Guardians of the Galaxy screenwriter and co-writer of Captain Marvel. In short, Perlman essentially said there’s “reinvention” on the table for the character — not a shocking statement, happens all the time in adaptations — stemming from her origin’s similarity to Green Lantern.

Modern Captain Marvel’s All About Carol

As mentioned by Perlman, the origin for Carol’s powers in the comics is very Green Lantern-esque. The Kree warrior known as Mar-Vell’s powers are basically mirrored onto her after a terrible accident. She then went on to become Ms. Marvel for a very long time.

Kelly Sue DeConnick’s modern run defined who Captain Marvel is, but the more recent comics from after DeConnick’s run actually put Danvers as the leader of an orbiting group of planetary defenders called Alpha Flight. (Which itself is an updated version of the historical name).

In fact, almost all of Captain Marvel’s most recent stuff has been looking out at space. There’s a more Earth-focused aspect to Civil War II, but even that is couched in a very specific “we want to stop intergalactic threats before they become threats” angle.

Maybe There’ll Even Be a Little Captain America

After many years of the Ms. Marvel moniker, Carol Danvers is finally convinced to take on the mantle of Captain Marvel by none other than Captain America. I say “convinced,” but really it’s just a small pep talk to remind Carol that she’s long since paid her dues, and that the previous Mar-Vell would be proud to have her bear the title.

Obviously Carol is her own character, and will apparently be spun off away from Mar-Vell, but a nice little nod to the comic book series would be to have Steve Rogers be instrumental in some way to her superhero name decision.

More like this
Culture
6.29.2022 10:00 AM
6 years ago, Marvel released its most incoherent sequel ever
By Graeme McMillan
Entertainment
6.21.2022 9:00 AM
Ms. Marvel Episode 3 release date, time, cast, trailer, and schedule for the Disney Plus show
By Jeff Spry
Entertainment
6.24.2022 11:15 AM
Behind the scenes at “Herogasm,” The Boys’ most NSFW episode ever
By Aaron Pruner and Jake Kleinman
Related Tags
Share: