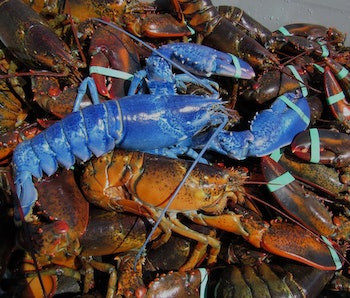 Lobsters are typically a green-brown color (they’re red post-boiling), but one in two million lobsters wins the genetic lottery and grows up blue. The stunning two pounder caught by Nickerson on Monday is pretty lucky – instead of being boiled alive, it’s going to live in an aquarium for all to see. The wonder!

The Nickersons have named the little guy Bleu and posted this image on Facebook. And at two pounds, it’s not really a little guy, though. Other blue lobsters have been smaller, simply because the bright blue color makes them attractive for predators. Bleu was lucky in the water and you might consider it lucky that it’s not headed for a pot.

On her Facebook post, Jan Nickerson writes “the people from the New England Aquarium are amazed he has made it to the size he is, in the ocean, as he is a target for predators. They do not usually make it, that is one reason they are rare.”

Catching a real-life equivalent of Clauncher is quite a feat. Although the bright blue body of the crustacean is unnatural-looking, it is actually caused by a naturally occurring, simple, genetic mutation. The brilliant coloring is caused by a change that causes the lobster’s exoskeleton to overproduce the protein crustacyanin. In normal colored lobsters, this protein is what makes them greenish-brown.

Crustacyanin is destroyed when the lobster is boiled, leaving the familiar bright red color behind. If our blue mutant was bound for the dinner table, it would probably also turn red, as the blue proteins would break down into its individual parts, which appear red.

According to ABC News, after Nickerson caught Bleu, he called his wife Jan Nickerson and had her meet him at the dock. Bleu fast became a celebrity in Plymouth, Massachusetts with children coming to see him from the local Lobster Tales tour boat.

Nickerson caught one other blue lobster in 1990. That lobster went to the Manomet lobster pound in Plymouth near where the Nickersons are from, but they are hoping for a more high-profile home for Bleu. On Monday night, Jan posted on the Facebook photo of Bleu, “I am excited he been shared, as of tonight, at 11:35 p.m. 72 times, and seen by 382 people. This is what we had hoped; that his beauty and how amazing nature is, could be seen by people who don’t experience the same things local fisherman observe.”

The Nickersons have already reached out to the New England Aquarium in Boston on Monday to find a permanent home for their blue lobster, so this little buddy isn’t going to be anyone’s dinner. Blue lobsters are considered lucky, and so most are donated to aquariums or set free.

Bleu will probably just hang out in his new home in the aquarium, but who knows — maybe he will bring his game to the next level like his cartoon counterpart: