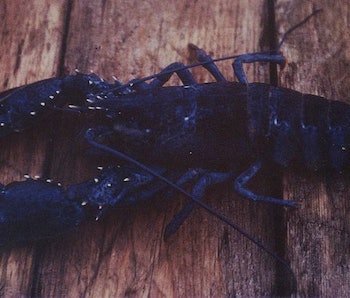 Lobster are delicious, but they’re not exactly the most appetizing thing to look at. Most lobsters are a dirty greenish brown, and only become the rusty-red color of delicious shell-cracking feasts after they’re boiled (often alive, which is not so chill). But an estimated one in two million lobsters isn’t the color of garbage — they’re a stunning iridescent blue. Over the past week, two fishermen won the lobster lottery just 93 miles apart from one another in Nova Scotia, Canada.

Blaine Marsh, a lifelong fisherman, found the first one while fishing off Alder Point, Nova Scotia. Marsh’s wife Mary took it as an omen for the upcoming season. “It’s a good luck sign for the fisherman,” she told CTV, Canada’s CNN affiliate. “I hope the fisherman have a good season this lobster season.”

His granddaughter named the sea creature Blueberry, and the exotic beast got a lot of attention until another fisherman, Scott MacKinnon, stole the Marsh’s thunder with another capture off of Low Point, Nova Scotia. MacKinnon threw a little shade at Blueberry when talking to CTV. “Their lobster was undersized and ours was a pound and a half.”

Despite their size difference, both blue lobsters have one thing in common. A rare genetic mutation makes them produce too much of a protein that combines with a normal carotenoid, or organic coloring pigment to make crustacyanin, which reflects light as a bright blue.

The phenomenon happens in other crustaceans too, like these marron, a kind of crustacean native to Western Australia.

The Marsh family tossed Blueberry back into the sea, but MacKinnon plans to keep his till the end of lobster season, holding it in a tank on his boat for good luck. There’s no chance he’s eating a winning lottery ticket, no matter how delicious it is.

More like this
Science
8.14.2022 1:00 PM
'Gifted' dogs may share this one personality trait. Does your dog have it?
By Tara Yarlagadda
Science
8.11.2022 5:00 PM
Look: A deep-sea expedition just captured these incredible views of life underwater
By Jennifer Walter
Science
8.10.2022 3:00 PM
Watch sea sponges sneeze out stringy mucus in slow motion
By Jennifer Walter
Related Tags
Share: