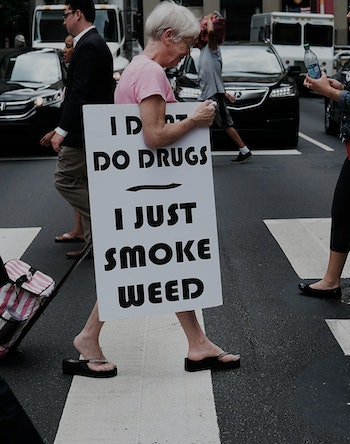 The U.S. Drug Enforcement Administration announced on Thursday morning that nope, marijuana is not permissible for use in drug research.

Scientists are pissed. Cannabis, the DEA maintains, still doesn’t meet the criteria for “currently accepted medical use in treatment,” lacks accepted safety data, and has a “high potential for abuse.” So while the DEA has expanded concessions for marijuana manufacturers supplying scientists with research-grade weed, it’s as if the government just threw a ¯_(ツ)_/¯ and walked away.

“It’s not going to affect it much,” Johns Hopkins Medical school psychiatrist Ryan Vandrey, Ph.D., a researcher studying the effects of marijuana on people with PTSD, told Inverse. While he admits that increasing access to the drug will be helpful — right now, all of the weed used in American research comes from a single National Institute on Drug Abuse (NIDA)-approved supply branch at the University of Mississippi — the DEA’s ruling skirts the real issue marijuana researchers face.

“What this didn’t address is the mountain of regulatory hurdles we have to surmount in order to do our studies,” says Vandrey. Under the current rules, marijuana is lumped together with heroin and ecstasy as a Schedule 1 drug — a class of substances deemed too dangerous and medically useless to open up to researchers — so getting approval requires getting the thumbs-up from multiple regulatory bodies, which includes local institutional review boards, NIDA, two different divisions of the FDA, and local and federal branches of the DEA.

As legalization of medical and recreational marijuana continues to take place on the state level, the need to understand what effects it actually has on us has only grown more urgent. Unfortunately, having to jump through the government’s circus of regulatory hoops is a huge pain for scientists hoping to get their research off the ground quickly. “It takes more than a year to start a project, and then amendments can take months to get reviewed and approved,” Vandrey says, resignedly. “We have to be very patient people.”

Researchers have been waiting patiently since 1970, when the Controlled Substances Act first listed cannabis as a Schedule 1 substance. The reasoning — then as now — was that there was a “considerable void” in our knowledge of the drug and therefore was safer to keep under heavy restriction. The most frustrating thing about this logic, Cleveland Clinic neurologist Eric Baron, Ph.D., tells Inverse, is that the only way to fill that void is to open marijuana up to researchers, which the latest DEA decision patently did not do.

“The problem is that the Schedule 1 status has itself prevented research efforts in order to even try to prove or disapprove DEA claims of ‘no medicinal benefit’ by not only making it illegal to research cannabis, but also preventing federal funding,” he said in an e-mail, calling the situation a catch-22. He points out that the FDA has “hypocritically” approved two synthetic versions of THC and awarded a patent for cannabinoids used for health purposes, which, he argues, is proof the government does believe marijuana has some medical worth.

The reasons the federal laws prohibiting weed research seem, paradoxically, to ignore all of the evidence showing that it’s worth researching are diffuse. Whether that is a compelling enough reason for the DEA to maintain tired arguments, however, depends on who you ask. “The DEA decision is complex because there’s so many levels of political reasoning and sociopolitical issues related to it,” University of California San Diego psychiatrist Ty Brumback, Ph.D., who studies the effects of the drug on adolescent brain development, tells Inverse.

His stance is noticeably softer and more optimistic than that of University of Florida researcher Emily Plakon, Ph.D., who studies the medical and recreational impacts of marijuana. Plakon tells Inverse that the DEA ruling not only makes it harder for scientists to carry out much-needed research on marijuana but also deters them from undertaking such studies in the first place. “Scientists are afraid to approach and research this topic due to its federally criminal nature,” she said, arguing that regulations should be decided on the state, not national, level.

To be fair, the state of marijuana research has been advanced, albeit slightly, as a result of the DEA decision. At the very least, Brumback says, future studies will have a larger selection of weed to study; in its official ruling, the DEA outlined its plans to add more manufacturers to the list of marijuana suppliers authorized to provide weed to scientists. Brumback hopes this means the varieties of marijuana available to scientists will more closely approximate the strains that are currently being sold on the street, making it easier to design studies that produce practically useful results.

“We know that over the last 20 years, the levels and the concentrations of THC have increased exponentially,” he tells Inverse. “The supply from the University of Mississippi is not the same as what people can get on the street. There’s a disconnect, there.” In other words, it’s hard to draw conclusions about the effects of casual marijuana use from scientific data based on less dank weed. Brumback is hopeful that the DEA’s caveat will at least help make existing research, however limited, more applicable to real-life drug-taking scenarios.

The legislative changes necessary to give marijuana research the room it needs to progress seem impossible to advance. Vandrey, looking forward, imagines three scenarios that would make things easier for researchers like himself. “The DEA could change their policy. Congress could act and pass a law. It could get rescheduled,” he says. But for now, the DEA will only approve research that the U.S. Department of Health and Human Services deems “scientifically meritorious” — a category that, as of today, includes only 350 individuals nationwide registered to conduct research on marijuana and its components.

The fact that the anticlimactic DEA ruling didn’t surprise most researchers is indicative of the state of frustration they’ve accepted as part of the field. “To be fair, we weren’t necessarily expecting them to come out and reschedule marijuana now,” Brumback says.

He points out, however, that the growing acceptance of marijuana on the state and social levels can only mean good things. “It almost seems inevitable down the road,” Brumback says. “In the big picture, it feels like the momentum is moving in that direction.”