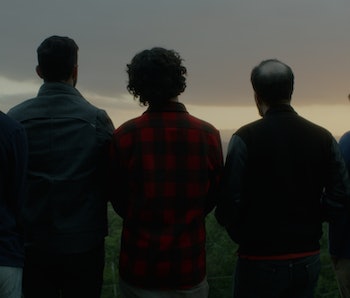 Nothing should be taboo in comedy, but some things require a more delicate handling than others. In JOSHY, writer and director Jeff Baena (co-screenwriter of I Heart Huckabees) doesn’t make suicide the butt of his jokes, but does use it as the catalyst for a film filled with laughs.

“I think comedy has generally arisen out of a place of something terrible,” Baena told Inverse about his sophomore film. As in his 2014 zombie debut Life After Beth, Baena here shows a knack for laughs where most would find drama or anguish, though he doesn’t shy from committing to devastating emotional truths. After premiering at the Sundance Film Festival last January, JOSHY is primed for a wider release by Lionsgate on August 12.

In JOSHY, the titular Josh (Silicon Valley’s Thomas Middleditch) is locked into his bachelor party getaway after the suicide of his fiancée (Alison Brie). While most of the groomsmen bailed, a few — best friend Ari (Adam Pally), alpha male Eric (Nick Kroll), and the requisite wet blanket, Adam (Alex Ross Perry) — commit to the weekend to avail Josh of his grief.

“It’s a way of coping. Obviously people are going to label this a dark comedy, [but] the source of comedy is a coping mechanism, and in this movie it’s a distraction and a salve for the pain being felt.”

What inspired the film? Weekends-gone-wrong is a popular comedy sub-genre, but where did JOSHY with its tone and setting come from?

Discussions Adam Pally and I had while playing basketball, about male bonding and the way men confess and articulate emotions, how complicated and ineffectual they are at that. We’ve culled together our experiences and experiences we’ve heard anecdotally about guys going on bachelor parties that actually mirrored this situation. We all had stuff that either was similar or like a good launching-off point to get where we got.

JOSHY flips between comedy and some really dark emotional truths. As director, what kind of balancing act was that to shepherd, especially with how sharp moods have to be when on set?

I don’t think it was a balancing act. It was more of, you had to use your ear to see it’s authentic and true. Obviously, experience in the real world is not a genre. It sort of defies genres, so my intention was to capture that ambiguity. If something felt false, I would make an adjustment, but after the first couple of days everyone figured out what we were going for. The comedy wasn’t from laughing at the characters. It’s laughing with. The drama isn’t coming from imposition. It’s coming from avoidance.

So many comedies of this type tend to be in your face, but JOSHY is subdued. Was it because of the premise, that this all happened because of a suicide, or was there something else that set the tone for the movie going forward?

My sensibility is to go for subtle as opposed to brash. Obviously the movie is structured around tragedy and the fallout from that, so there always is a subtle morose undertone, and to a greater extent the guys who were not part of that tragedy are now coping with it. Their attempts at a good time, it’s always colored by a sadness underneath, an avoidance of confronting the core of that.

So the movie is always almost veering away from being a drama, while I’d say at its core it is. The denial and the avoidance affect themselves as the comedy, but it ultimately is coming from a hurt place. I think the result of that creates that subdued energy.

One character that stands out is Alex Ross Perry’s Adam. We’ve all been that wet blanket whether we like it or not, but besides drama and to provide closure with the board game, what was his function?

My approach to the characters were to make them three-dimensional, at the same time acknowledging this weekend is a projection. Even the title, JOSHY, is what Adam Pally calls Thomas’s character. Alex Perry calls him Josh, and Nick Kroll calls him Joshua. Everyone has their own idea who he is, and the movie marginalizes Adam. He’s in the background most of the time because everyone came to this weekend with different ideas of what they wanted to bring. His dream is to have this moment of emotional poignancy and sharing what’s going on in their lives. And also playing board games, his connection with Thomas.

There’s the cliche that comedy is tragedy plus time. Barely any time has passed in JOSHY, just four months. Did that influence the characters and the extremes they go to?

It’s no coincidence that most of the guys in the movie are coming from a sort of Jewish perspective, which is a culture [that] sort of prides itself on overcoming tragedy and finding humor despite what horror and degradations have been visited upon them for years. I think it’s not a super strange thing to find.

You’ve assembled a few heavy comedy hitters from TV. How did you decide when to let your performers improv and when to make sure they stick to the script? How much of this was an improv film?

It was a collaboration. We had the story worked out, we knew what the characters were going to say, but in terms of dialogue, I let the actors improvise to make it sound as if it was coming from them as opposed to some construct imposed on them. We were actively focused on the performances. It wasn’t like people were replicating something they worked with their acting coach, like normally. It was a really present process that required absolute attention and sensitivity to detail. It was amazing. It was real directing, it was real performing.

At Inverse we’re nerds so I have to ask: Mecha Dungeon Crawl, the board game that structurally holds up the film. Was that a real game?

Mecha Dungeon Crawl is a real game created by my script supervisor’s husband, Patrick. What you saw was the prototype. I know he tried to crowd-fund, I don’t think it worked it out. I think he’s abandoned it. But all the rules and action figures, that was his. We were trying to get clearances for games that were complicated and nerdy and fun. She [our script supervisor] was like, “I have the perfect game.” I did the box art on Photoshop myself, and we just rolled with it.

JOSHY will be released on August 12.

More like this
Culture
7.1.2022 11:30 AM
35 years ago, Dennis Quaid made the last sci-fi movie of its kind
By Dais Johnston
Entertainment
7.3.2022 2:00 PM
How Marcel the Shell invented "never been done before” stop-motion
By Eric Francisco
Entertainment
7.3.2022 11:00 AM
Marvel’s most mysterious Phase 4 trends is setting the MCU up to fail
By Dais Johnston
Related Tags
Share: