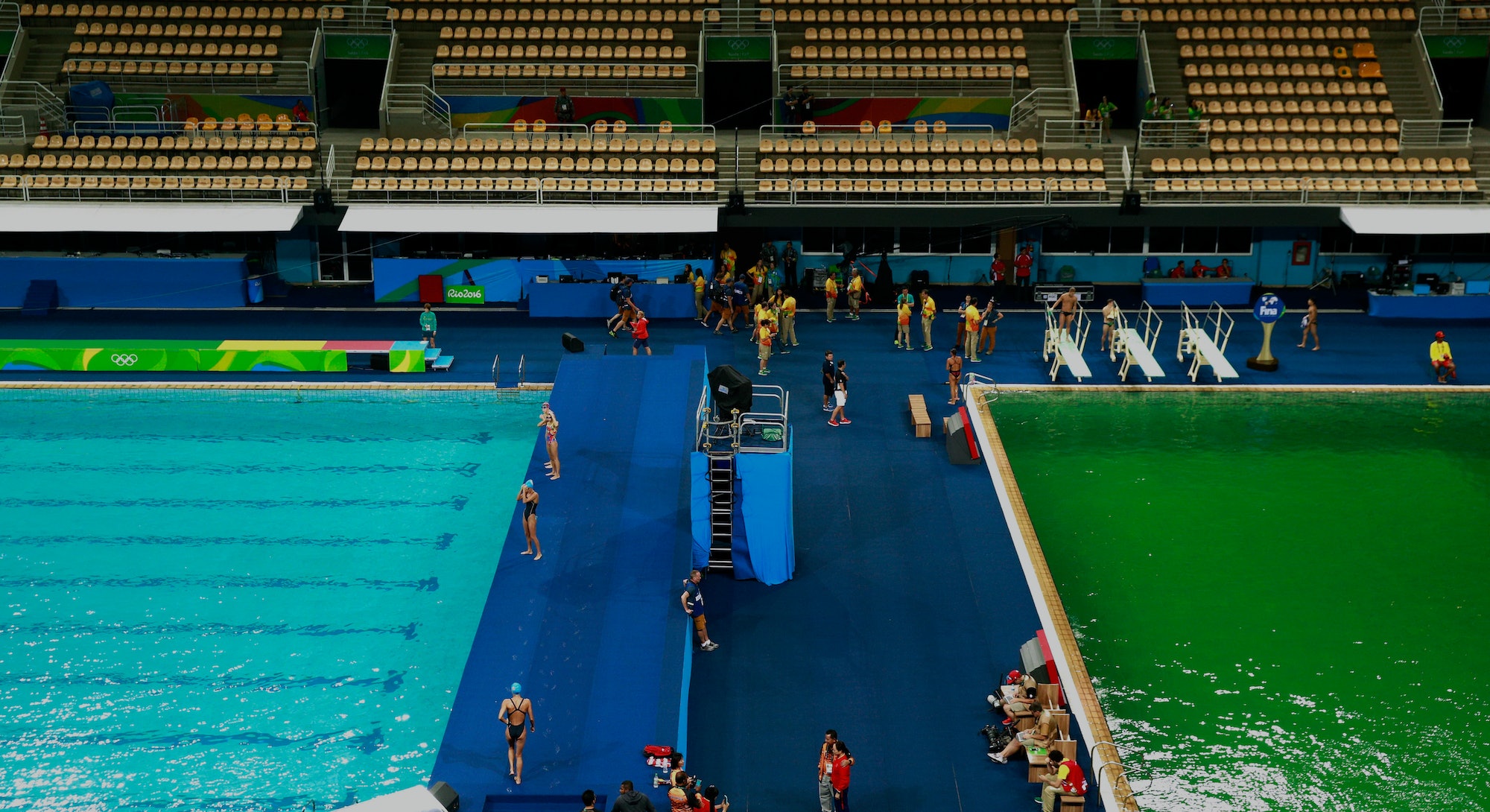 It’s a pretty weird day at the Maria Lenk Aquatics Center in Rio de Janeiro – the water in the diving pool has turned green.

On Monday, the pool was a lovely light blue, ready for the men’s 10-meter synchronized dive. Overnight, it underwent a shocking transformation, becoming a weirdly murky green. Tom Daley, one of the bronze medalists in the event, posted comparison pictures to his Twitter.

Despite worries from fans and divers, the Olympics officials continued on with the event as though everything was normal. There are a number of rumors floating around about what has happened to the pool to turn it green, and although Olympic officials have promised a statement, nothing has materialized. There are a few likely reasons for the color change.

The pool became darker and darker green as the afternoon went on. Luckily, since the raw sewage problems in Rio are mostly in the open water, it’s unlikely that the color is due to sewage in the pool. Since the diving pools need fresh water, it wouldn’t be extremely expensive to purify the salt water from the bay to use in the pools. This leaves us with a few realistic options:

According to Owen Gibson at The Guardian, apparently Olympic officials suggested that the color change was an intentional choice to reduce glare early on in the process. Since no one knows more about this, and there’s no immediate press statement, this seems pretty unlikely.

Okay, so if you have too much copper or another metal in your pool, the water can turn green. This can happen if the water is acidic, or if copper heating elements in the pool are exposed. It’s also possible that the metallic ions can be brought in with the source water for the pool, so that might be the root of the problem.

If the two pools have separate filtration systems, a problem with the filter on the diving pool is a likely culprit. If the filter is clogged, it could prevent the pool from cycling. Now this could allow for two color culprits – algae again, from lack of circulation and proper chlorination, or pollen. When pollen builds up in pools it can cause a green color. Since the polo pool is fine, there would have to be a filtration problem in the diving pool to allow this to happen.

Pool water can bloom algae overnight if the chlorine drops too far. This is particularly true in warm weather, open-air pools, like the diving pool in Rio. Of course, the fact that the water polo pool right next door is not affected makes this theory a little questionable. Both pools are kept at 79 degrees according to Olympic regulations, so for this to be true, the diving pool would have had to have seen significantly more sun Tuesday morning, or have something else going on as well.

However, according to a statement from Mario Andrada, a Rio spokesperson, the color was caused by a proliferation of algae. “This was because of heat and a lack of wind,” he told the AP. “We did all the chemical tests. The pool will be blue [Wednesday.]”

He then also joked that if it was green and yellow it would be have been a patriotic statement. It is still unclear exactly what happened, and there should be an official statement from the Olympics Committee soon. However, they have been promising an official statement since yesterday, so maybe don’t hold your breath – unless you happen to be an Olympic diver, in which case, definitely hold your breath.

Update 8/10/2016: This story has been updated with the statement that algae caused the green coloration.