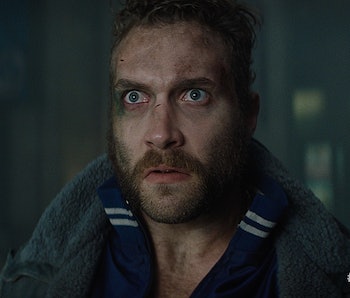 Suicide Squad’s Captain Boomerang, played by Jai Courtney, is an Australian guy who loves boomerangs so much that they are his weapon of choice. Later in the movie, he even turns one inexplicably into a camera-drone, but when it’s crushed, he and the film both shrug it away. His name alone — and his habit of saying “mate” every three words — is a lazy cultural stereotype, like having an Irish character named Captain Stepdance who says “boyo!” every other word. But in a movie filled with cultural and ethnic stereotypes it never attempts to expand on or subvert, this is par for the course.

In fact, we’d even venture to say the good Captain is the film’s best character. Not because he’s more entertaining than Margot Robbie’s Harley Quinn or Will Smith’s Deadshot, but because, more than any other character, everything about him — from the tired cultural stereotype to his utter lack of motivation and development — perfectly distills what Suicide Squad is.

Just take a gander at his face. It’s easy for casual observers to mistake him for Tom Hardy, because Jai Courtney is very much a poor man’s Tom Hardy and the movie knows it. It’s milking the mild resemblance to trick you into thinking you’re getting a better product — much like the film’s deceptively promising trailer.

The second thing to note about Boomerang is his unicorn Pinky, which is not in the comics and randomly appears in one scene in the movie. It couldn’t be clearer it was created explicitly to sell in Hot Topic. If we’re being generous, it’s in there as a joke, but merely having him say it’s name — “Pinky!” during a fight scene is more a suggestion of a joke than an actual execution of one.

Lastly, Boomerang’s motives are never once explained, just like the film’s “plot.” His character arc involves ditching the group at one point, then subsequently rejoining them for the final battle. At no point is his change of heart explained, it’s simply handwaved away.

Captain Boomerang is the embodiment of Suicide Squad, the captain of this sinking ship, and for that, we salute him with Faygo, which is probably the Joker’s favorite drink that was left on the cutting room floor.

More like this
Entertainment
6.24.2022 11:15 AM
Behind the scenes at “Herogasm,” The Boys’ most NSFW episode ever
By Aaron Pruner and Jake Kleinman
Entertainment
6.23.2022 4:42 PM
Obi-Wan Kenobi Easter egg gives the show’s best scene a deeper meaning
By Dais Johnston
Entertainment
6.17.2022 11:00 AM
15 years ago, Marvel revealed its most ambitious crossover ever
By Richard Newby
Share: