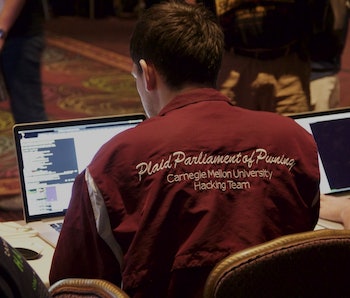 A Carnegie Mellon team of hackers operating under the very fun name The Plaid Parliament of Pwning won what is essentially the World Series of hacking over the weekend — for the third time in four years.

The competitive cybersecurity team brought home a decisive victory at Def Con in Las Vegas under the leadership of David Brumley, a Carnegie Mellon professor and the group’s coach. The actual competition was a sort of-cyber-spin on capture the flag: the team needs to crack its competition’s servers while simultaneously protecting its own. (Had the Plaid Parliament of Pwning not won the competition, it would have remained Number 1 in our hearts on the strength of the name alone.)

“Everyone on the the team likes the letter P,” Brumley said. “So, ‘plaid’ because the CMU color is plaid, and then we just had to make the rest work. Everything we do starts with a ‘P.’ It sounds like a bad joke, I know, but it’s the truth.” (“Pwning” is hacker-speak for breaking into something).

Brumley’s job, he says, is to facilitate the cycle of incoming hackers and make sure the team is maintained, curating both offense and defense and encouraging new talent to join when he spots it.

The team itself is a somewhat fluid entity. There are generally around 30 participants, with those who come to Def Con being the more active ones — maybe 15. The core group — five people or so — founded the group in 2011;.

“One of my students was trying to qualify for another team, and then he didn’t qualify,” Brumley said. “And I was like, you realize we’re at the number-one school for computer science — why don’t we just form our own team? And in 2011 we were ranked number one in the world.”

Though they’ve won most years since forming, they lost — a relative term; they got second place, and were still ranked first in the world — in 2015. The competition itself keeps evolving and getting more difficult each year. The teams that were on top when the Plaid Parliament of Pwning first formed are way down near the bottom now.

“We’re pretty proud,” Brumley says. “Every year it’s more competitive, it was really tough this year. You have people on other teams who [when they’re not competing] are making hundreds of thousands of dollars finding bugs. We’re also excited because automation is a new thing now, you’re starting to see some teams operate like Cyborgs. It’s going to be exciting to see what the future looks like.”