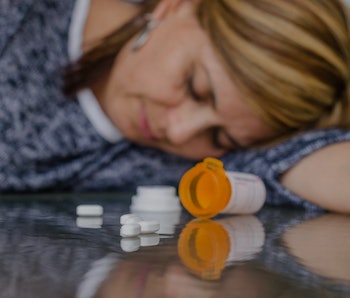 In July, a rash of unexpected deaths in California were blamed on tiny white pills — or, rather, the hard beige pellets that were circulating the streets under their name. The culprits was a concentrated mashup of Fentanyl and an opioid wannabe going by the name Norco.

It’s not the first time that Norco has unleashed its fatal touch. Over 42 overdoses have been caused by the counterfeit painkillers in the San Francisco Bay Area alone, and the chances the street drug’s reach will extend past the West Coast are high. Parading as legitimate painkillers — down to the manufacturer’s imprint — these pills are high-class, high-potency fakes that even some of the most seasoned narcotics enthusiasts can’t distinguish from the originals.

The Norco head-fakery has forced the American College of Emergency Physicians to get involved, making clear delineations between what they call “brand-name Norco” and its doppelgänger, “street Norco.” If you’re the kind of person who prefers the legitimate route for getting narcotics — that is, prescribed, not pushed — you’ll end up with a non-refillable bottleful of the white pills by way of your physician, who may also refer to them as Zydones, Hycets, Lorcets, or, less obscurely, Vicodins. Brand-name Norco is a pretty strong painkiller and cough suppressant containing the ubiquitous drug acetaminophen together with hydrocodone, which works via the standard opioid route, just like its precursor codeine.

Street Norco, a much more savage cocktail of compounds, prefers to pull out all the stops when it comes to painkilling. As far as scientists can tell — and it hasn’t been easy, because street Norco circulates stealthily — the counterfeit pills don’t contain any of the originals compounds at all. Instead, it replaces them with the terrifyingly strong opioid fentanyl and a little-understood synthetic drug known only as “U-47700,” which is suspected to be one of hundreds of new synthetic opioids produced in clandestine Chinese chem labs and smuggled into the U.S. via Mexico.

Emergency physicians in California were alerted to the counterfeit drug after a Fresno woman showed up at her doctor’s office complaining that the Norcos she took for her chronic back pain — which she’d acquired on the street — made her “exceedingly sleepy,” which is not a common side effect of the pill. Half an hour later, she passed out and was rushed to the ER, where her blood tests revealed significant amounts of U-47700 and the dangerously potent fentanyl.

The most opioid-tolerant lovers of pain medications may wonder why street Norco’s unsubtle approach to painkilling is a problem. Isn’t fentanyl a narcotic pain reliever, just like the OG Norco’s hydrocodone? If the point is to dull pain, doesn’t it technically do the job? Think of it this way: Popping a street Norco is like sipping what you think is a standard gin and tonic then realizing — if you ever wake up — that it was straight moonshine, mixed with the sketchy bartenders “special brew.” Sure, it got you blackout drunk. But weren’t you just aiming for tipsy?

Even without its Norco guise, fentanyl has already wreaked havoc in U.S. The drug, which is thought to be 80 times stronger than morphine and hundreds of times more potent than heroin, is especially dangerous to users who think they have a high tolerance to opioids. Assuming they can handle more pills than recommended, these users bite off more than they can chew, unprepared for how strong Fentanyl really is. Without the proper opioid “training” — usually, using the less potent compounds morphine and oxycodone — Fentanyl’s strength can easily overwhelm a body; inexperienced users can be killed by as little as 0.25 mg.

As for U-4770 — well, we simply don’t know. Novel synthetic substances have become alarmingly ubiquitous — so widespread, in fact, that the UK Government, in a rather clumsy attempt to control their proliferation, issued a blanket ban on all such substances.

Despite the sudden emergence — and urgency — of the counterfeit Norco epidemic, the fake pills are just the latest complication in the clusterfuck of addiction and dependency that is the American Opioid Crisis.

More like this
Mind and Body
5.17.2022 8:41 PM
Mysterious hepatitis outbreaks in children are confounding doctors — here's why the cause is still unclear
By Katie MacBride
Mind and Body
5.17.2022 10:00 AM
Fertility clinics turn women away over their weight — new research undermines that practice
By Nick Keppler
Mind and Body
5.14.2022 11:00 AM
How to treat adult ADHD: A psychologist explains medication and more
By Laura E. Knouse and The Conversation
Related Tags
Share: