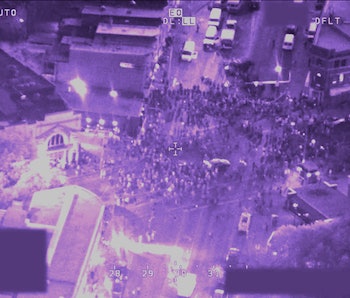 The FBI just offered the world a look at what it sees from its eyes in the skies.

The agency released 18 hours of unedited footage shot by police and FBI aircraft circling over the Freddie Gray protests in 2015. What’s even more surprising is it did it almost voluntarily. The agency released the film after the American Civil Liberties Union filed a Freedom of Information Act Request related to domestic spying, but it turns out the ACLU got more than it bargained for.

“Although these videos are within the scope of our FOIA request, we did not specifically ask for them and were surprised to receive them,” ACLU staff members wrote in a blog post about the new footage.

Nobody’s complaining, though. The resulting tape is an unprecedented look at what exactly the FBI sees with the spy planes that criss-cross the country and collect footage from many major cities, especially when they’re focused on protests.

According to the ACLU, the FBI “captured hours of protests, from major marches and rallies on city thoroughfares and public squares, to smaller gatherings on sidewalks and in neighborhood intersections” and sometimes “followed individual people walking or cars driving through the city.”

This level of surveillance is worrisome for several reasons. Many of the protestors didn’t break any laws, and should not have been spied upon simply because they were protesting the killing of unarmed black men. The footage also raises questions, like who exactly was flying drones around the protest areas:

“Who was flying these drones? Baltimore Police? Curious city residents? Journalists? What were they looking for? And were the flights legal?” the ACLU staff members ask in their blog post. “FAA rules require drones to remain within the line of sight of the operator, and to fly at relatively low altitude.”

The use of drones near the protest area is a definite red flag. Lightweight drones could be used to spy on individuals or even drop tear gas to halt the protests if police decide that they’re getting out of hand.

That didn’t happen with the Freddie Gray protests, but the questions still linger. It also isn’t clear how the FBI decided what, or who, to focus on. The videos sometimes cover much of Baltimore, but other times they’re recording a single vehicle. Police are already using social media to decide what to snoop on; does the FBI do something similar, or was it just looking wherever it wanted to from the sky?

This footage reveals a lot about how law enforcement uses surveillance technology, but the answers to many questions still aren’t clear. Who decides what the plane should focus on? Were those drones connected to the surveillance in any way? For how long will that video be kept? We still don’t know, and that’s why the ACLU is still pushing for more information.

“Strong controls should be placed on these surveillance flights now, to ensure that developments in technology don’t outpace the protections that are in place,” the ACLU staff members write in their blog post. “We must be wary of encroaching surveillance that can chill protesters from exercising their First Amendment rights and violate the privacy of innocent people on the ground.”

That footage was captured from a high altitude with powerful cameras, but the footage doesn’t appear to show anyone clearly enough for the FBI to use its controversial facial recognition tools on them. You can watch a huge amount of the footage right here.

More like this
Innovation
3 hours ago
Robots are ready to get touchy-feely
By Sarah Wells
Innovation
6.29.2022 6:00 PM
Can cars run on water? The science of a TikTok conspiracy theory, explained
By Andrew Moseman
Innovation
6.27.2022 8:00 PM
Artificial photosynthesis can grow plants without light — and may solve a planetary dilemma
By Steph Lee
Share: