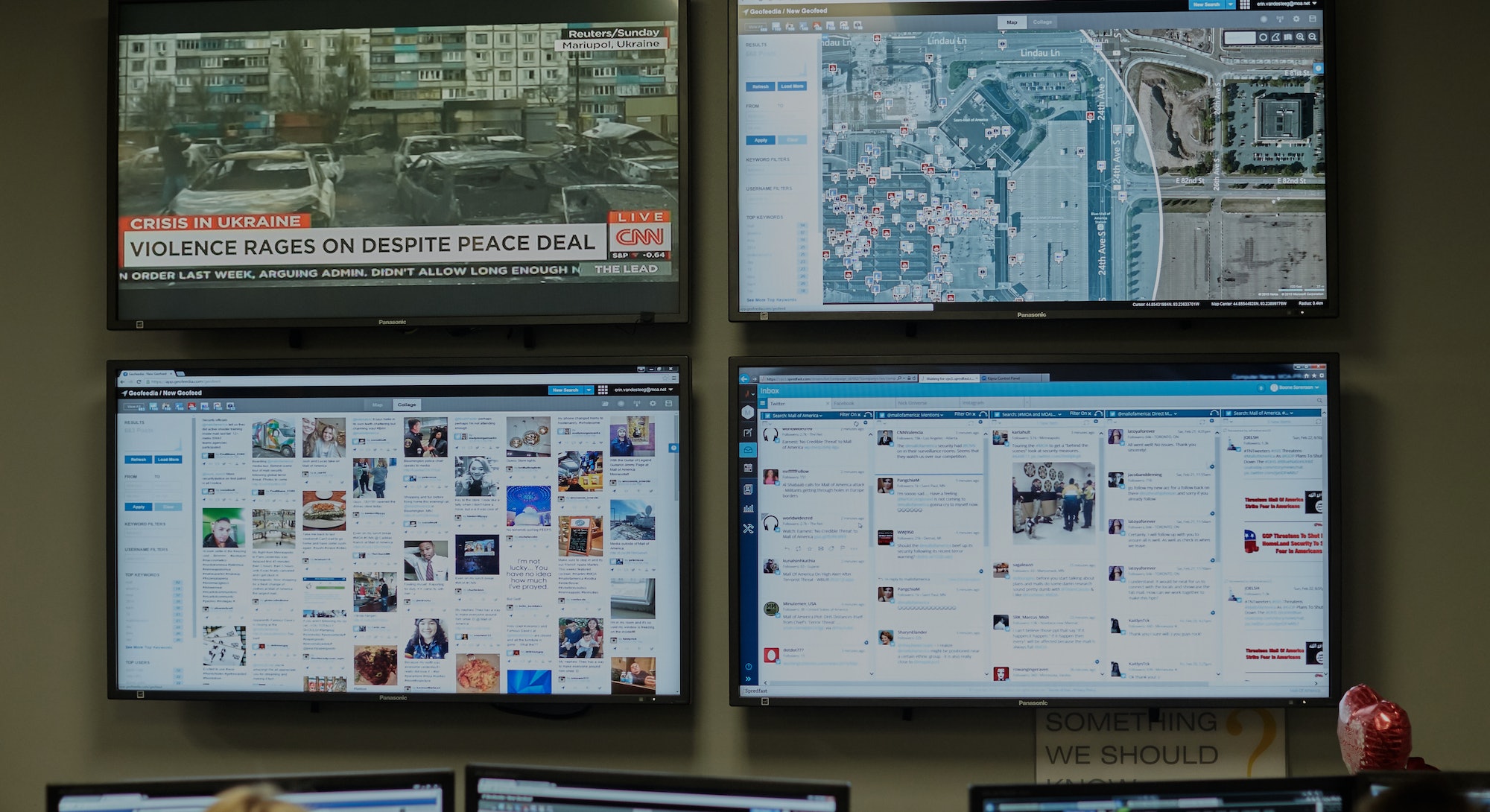 A burst of fire from an automatic rifle rings out on a deserted city street, and, instantaneously, a gunshot detector working in conjunction with a smart surveillance camera identifies the location of the shooting. The system automatically alerts a social media monitoring website, which establishes a digital, geo-location perimeter on a map of the neighborhood.

Now, any posts on Facebook, Twitter, Instagram, or any other location-tagged social media uploaded in that area will appear on a display at police headquarters. An uploaded Vine from one block away could show someone running away, and give the cops a starting point for their investigation.

How long until that hypothetical situation is a reality?

I interviewed Guthman at his company’s booth during ISC East, an annual two-day event that bills itself as the largest physical security convention on the East Coast. It is both a cornucopia of surveillance tools born from the fever dream of a paranoid conspiracy theorist, and a mind-numbingly dull event that almost surpasses the adrenaline rush of a boat show.

This is the third year I’ve covered ISC East, and I’ve become increasingly convinced that the era of total surveillance — the arrival of the panopticon — will not come at the barrel of a gun, but in the guise of banal corporate speak. We will not live under the oppressive eye of Big Brother, but rather in the era of integrated solutions designed to maximize situational awareness for the end-user.

How does Geofeedia fit into all this? Like most of the products on display here, it’s hard to argue that its service can provide corporate clients or law enforcement with an incredibly powerful, potentially valuable tool. In the aftermath of the Boston bombing, for instance, Guthman describes how investigators used Instagram photos of the finish line to analyze which security camera feeds they should look at first. It’s also easy to imagine the positive uses for Geofeedia – whose clients include local, state, and federal law enforcement – in the aftermath of a natural disaster.

What’s also glaringly clear, though, is that Geofeedia is not interested in grappling with the potential First Amendment implications of its product. Guthman says, rightly, that everything his product scoops up is public. “We’re simply aggregating it, and making it easier to find,” he tells me. “From a privacy standpoint, there is no issue.”

By now, most activists are well aware that their social media feeds are regularly monitored by police — including networks of individuals, or geo-tags, or provocative rhetoric. What makes Geofeedia interesting, and potentially terrifying, is its ability to monitor an area 24/7 and create searchable databases of any and all public posts within that boundary — and then to expand its collection of specific targets’ information beyond the geo-tagged posts. It means that the NYPD could — and maybe did — geofence Zuccotti Park for the entirety of the Occupy Wall Street movement.

The questions this technology raises are profound. Does the public understand that tweeting from a protest subjects you to enrollment in a police database? As anti-refugee sentiment and Islamophobia trend upward, what’s to stop law enforcement from geofencing mosques, or predominantly Muslim neighborhoods? It’s true that the police would only be searching what’s public, but will selective attention result in discriminatory practices?

By and large, these are questions Geofeedia is not responsible for answering. The courts and lawmakers will have to determine the exact contours of the Fourth Amendment in the age of total surveillance.

But if companies aren’t responsible for answering those questions, neither are they unaware of the political implications of their product. In a presentation earlier in the day, Guthman referenced a case study in which cops used Geofeedia to monitor an Israel/Palestine rally. On the company’s website, a promotional video uses the word “protest” as an example of the product’s surveillance capabilities.

The software also offers a feature called “sentiment,” which purports to be able to be able to predict violence on the part of demonstrators. When I ask about it, Guthman uses two recent Black Lives Matter protests as examples. “During the Baltimore riots, or Ferguson, you could see a drop” in sentiment, he says. “So a drop in sentiment, or an increase in posts,” he says, could signal a shift in crowd attitude.

How do you gauge sentiment? Is it how many times people tweet fuck the police?

“What it would do is it would take all the words in the phrase, and it attributes positive and negative points to them, and then proximity of words to certain words,” Guthman says. “So, somebody says, ‘I photobombed my friend,’ would, theoretically, come across as neutral. But if you said, ‘I’m gonna set off a bomb,’ or, ‘a bomb exploded,’ that’s going to be highly negative.”

When I ask if Geofeedia’s role in an investigation is ever mentioned in court, Guthman dodges and reiterates that all these posts are public. He says that the lawyer working the case would have to go to Twitter or Facebook to get the information included as evidence. I grant the point, but press him on my original question. “At the end of the day, it doesn’t matter whether they found it on Geofeedia or Twitter or Instagram,” he says. “It just so happens that the post is public and they could have found it any way.”