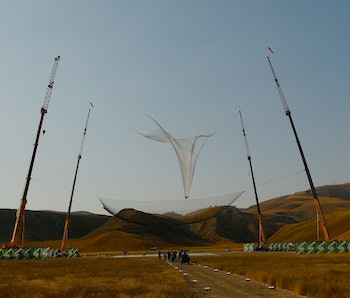 Aikins tumbled from 25,000 feet high, plummeting for a full two minutes before neatly landing on his back on a 100-by-100-foot net made of Spectra fiber situated 200 feet above the ground in the middle of the California desert. Even after managing to walk away from the landing without a scratch, Aikins expressed regret he landed about 20 feet away from the center of the net.

Aikins’ achievement makes us wonder about this net: Specifically, could the net help bring astronauts back to Earth?

The short answer is no, at least not in the way we currently conduct space travel. To put it gently, getting an astronaut back on Earth is really fucking different.

Aikins, who has over 18,000 parachute jumps under his belt and has been skydiving since he was 16, jumped out at an altitude of 25,000 feet, which is roughly 4.7 miles above ground level. Most skydivers actually jump out at half that height, about 13,000 feet. The thinner air meant Aikins needed to use an oxygen mask to function until he drifted down to about 18,000 feet.

At that point, Aikins started pivoting himself to aim for the center of the net, guided by GPS and signal lights. Before hitting the net, he flipped his body onto his back to ease the force of the landing — i.e., allow his limbs and back to fold in so that he could slide in more easily into the net as it decelerated his fall to a safe speed. Aikins hit the net at about 120 mph, likely reaching a maximum velocity of 150 mph.

That might seem like a minor detail, but the velocity aspect here is actually key. Skydivers use parachutes to slow down, but the chute should be let loose at the moment when it can ideally provide enough time and distance to slow the body down. The net needs to be built and positioned so that it not only catches an individual but also gives enough excess slack to slow the body down — hence why the net has to be chilling at the 200-foot elevation.

In fact, the force of the landing was the biggest concern for Aikins. He was initially required to wear a backup parachute for the stunt, but he was worried doing so would add more weight to his body. Halfway up the sky, Aikins decided he wasn’t going to use the parachute, and the requirement was lifted at practically the last minute.

So back to our original question: What about astronaut landings? Well, let’s remember that astronauts are hurtling down to Earth from higher up, so it’s a bit more dangerous. You can’t get back to Earth from space in one piece without a heat shield. You’ll disintegrate. End of story.

Every object in free fall towards the earth will not simply accelerate to infinity: It will reach a maximum velocity and stop there until air resistance slows it down. What determines this terminal velocity includes a ton of different factors, but if we’re comparing the average human body, terminal velocities are roughly the same from any height. Skydivers tend to reach a maximum velocity of about 150 mph, and — because the air closer to the surface is denser — usually slow down to about 100 to 120 mph, no matter if you’re at 13,000 feet or 25,000 feet.

Just a reminder that Baumgartner’s maximum velocity was 834 mph; he broke the freakin’ sound barrier. Like other skydivers, air resistance slowed him down as he made his descent, but it’s not totally clear what his terminal velocity would have been (Baumgartner opened his chute at about 8,200 feet).

See, Baumgartner was wearing a specially designed pressure suit to keep him safe and oxygenated at such a high starting altitude. This kind of suit was also designed to protect him from air resistance itself and keep it from shredding up his outsides and insides from G-forces. In short, it’s a heavy duty piece of equipment, and would have added a considerable about of weight to his body — so his terminal velocity would have been significantly higher than Aikins and he made his way to the ground.

Aikins’ Spectra is a cool material, but it’s certainly not designed to handle a landing like Baumgartner’s.

Plus, Baumgartner was only coming in from the stratosphere. A heat shield protected the astronaut drifting in from space would be wearing something much more durable. While traveling at even higher speeds, s/he would have to find a way to aim for the net — and navigating is not exactly an easy thing to do when you’ve just broken the sound barrier.

Could NASA or some others develop a netting that could bring in astronauts safely? Maybe, but barring the fact that it’s impossible right now, it’s insanely doubtful they would if they could. If an astronaut weren’t already fitted with a heat-protecting spacesuit (and a suit like that pretty much defies everything we know about spacesuit design), then we’d have to find a way to bring astronauts into an inner layer of the atmosphere before letting them go. Spacecrafts in the air can’t get back into space unless they already possess a powerful rocket — which nullifies any reason why a landing net would be constructed in the first place. Better for the astronaut to just hitch the ride on a spaceship until it lands, right?

It’s weird to say, but a better idea for bringing astronauts back to Earth would be a space elevator. And that is already an insane idea.