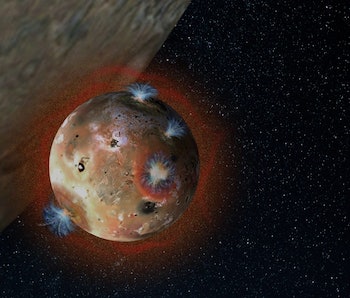 So here’s the thing about Jupiter. It’s huge, red, and kind of a big deal. It’s also got 67 moons, so you know, standing out is tough. But when Io — one of the four biggest — emerges from behind Jupiter’s literal and metaphorical shadow, its atmosphere blossoms back into existence from lying collapsed and frozen on its surface.

Yep, Io’s got a collapsible atmosphere, and it’s unlike anything researchers have ever seen before. Io already stood out because of its explosively volcanic nature, but a team from the Southwest Research Institute have found that Io literally freezes up into itself, according to a discovery they wrote about Wednesday in the Journal of Planetary Research.

Because Jupiter’s shadow obscures Io’s atmosphere, it’s been difficult for scientists to observe what happened while Io was in darkness until now. By imaging the moon with an infrared instrument on the Gemini Telescope, Constantine Tsang and his team were able to witness the changes for the first time.

They found that the temperature on Io drops about 35 degrees when the moon goes into Jupiter’s shadow. This takes the moon from freezing (-235 degrees) to more freezing (-270 degrees). For roughly one and a half Earth days — two hours on Io — the sulfur dioxide that makes up Io’s atmosphere collapses onto the surface as ice. When the moon emerges on the other side, the sulfur dioxide ice sublimates into gas again, repairing the atmosphere to its thick, sulfuric glory.

Volcanic eruptions from Io eject sulfur dioxide hundreds of miles out into space, and this gas contributes to some of the auroras on Jupiter itself. Now that the Juno probe is examining the planet, having a better picture of the atmospheric cycle on Io will be useful in creating the full picture of how the whole system works. It’s also probably high time we salute Io as one of the underrated badasses of our solar system.

More like this
Science
Jan. 31, 2023
If Alien Life Exists on an Ocean World, It May Follow These Chemical Rules
By Kiona Smith
Science
Jan. 26, 2023
NASA just directed its Lucy mission to target a skyscraper-sized asteroid
By Doris Elín Urrutia
Science
18 hours ago
Exclusive: NASA Explains How the Voyager Missions Could Live Until 2035
By Kiona Smith
LEARN SOMETHING NEW EVERY DAY.
Share: