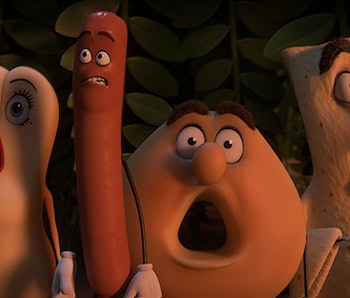 Seth Rogen and mature, post-Pixar animation stans may be rejoicing, but a hefty chunk the rest of the world is likely baffled while being subjected to the trailers and bus-stop ad for the upcoming Rogen-co-penned adult-CG film Sausage Party. It is star-studded, because it is easy to squeeze in a voice acting gig, and because it is a Seth Rogen-helmed project — would Hollywood refuse the man who masterminded hits like Pineapple Express and Superbad anything at this point? Listen for the voices from the likes of Kristen Wiig, Michael Cera, Paul Rudd, Danny McBride, James Franco, Edward Norton, and Nick Kroll.

It wasn’t that easy, however, for Sausage Party to make it past the pitch meetings; even the usually-controversial Sasha Baron Cohen, who saw an early sketch of the film, was “appalled” by elements of it, and skeptical of its chances. This should stand to reason, since it seems to be made with no demographic in mind: It is an R-rated, computer-animated film in the mold of Inside Out or Toy Story, but focused on food.

Apparently, it took Rogen nearly a decade to bring the idea to fruition — for a paltry $20 million, with the help of Annapurna Pictures. It seems like an absurd amount of time and effort to put into something that seems like an one-sentence elevator pitch, conceived whilst stoned: “What food could like feel, man?” Some characters were sketched, perhaps — the off-putting female bun with lipstick, voiced by Kristen Wiig, perhaps — and one-liners tossed around.

Against all odds — six years since news of it leaked to the public — Sausage Party has come to fruition. It’s been shown at several locations in several versions; the cut shown at South by Southwest in March had “shit that is drawn by head,” by Rogen’s own admission. Nonetheless, it was well-received at the festival. Other facts that trickled out of that screening’s Q&A: Edward Norton, as “Sammy Bagel Jr.,” does a Woody Allen impression, Salma Hayak plays a character called “Teresa the Taco,” and pieces of food are definitely going to “fuck” in this film.

One wonders, given this news, why the theatrical trailers aren’t a bit more raunchy, with less simple dark humor about food getting massacred in suburbanites’ mouths. Nonetheless, it’s bad enough for a movie theater in California to be forced to publicly apologize for airing a trailer for the film before Finding Dory.

Trailers, rumors, and the errant clips that are trickling out (see below) make one sort of feel like they’ve seen the movie already. It’s a classic Pixar-esque conceit, taken to dick-joke-y extremes by Rogen, Franco, and those who assisted in cooking up the concept over the years.

Skeptics might not credit it, but the reviews have been very good, though mostly critics seem just hung up on the concept, rather than the specific jokes. There’s a lot of admiration for the flipping of Pixar tropes in an unholy fashion, and praise for an expletive-filled musical number. There’s a talking used condom, we learn.

One wonders how the implicit Sausage Party joke can hold over a 90-minute run-time; admittedly, some writers have acknowledged that it wears thin at some points. But the main exhortation seems to be: Go see this thing, despite how dubious it might appear.

Unless of course, you’re a kid — Common Sense Media wants to make sure parents know this isn’t a place for children, and clarifying that it is the “first CG-animated rated-R film.” It’s a notable achievement for Rogen, if perhaps one destined to lead to meager returns at the box office, or angry moms and dads.