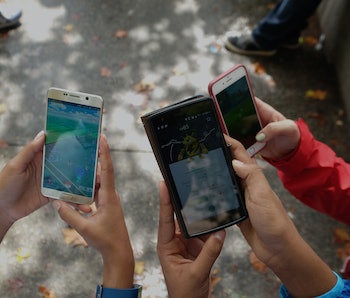 A passionate essay penned by a developer of PokéVision, a popular companion app to Pokémon, has been making the rounds today in the wake of a recent update. The update in question has incurred serious backfire, particularly because of the way developer Niantic Labs has apparently chosen to handle a recurring problem.

For nearly a month, the game’s “Nearby” screen had been stuck with a glitch that made it impossible to determine how close wild Pokémon might be. Players were originally able to ascertain the distance between themselves and a Pokémon by observing how many paw prints showed up under each creature on the “Nearby” screen. As a temporary solution, savvy trainers began developing crowdsourced apps and other ways to discern how close or far a certain kind of Pokémon might be.

With the new update, footprints have been completely removed — and the ability to use many third-party apps to locate Pokémon has ceased along with it. PokéVision developer Yang Liu published an open letter today to ask the developers at Niantic to throw fans a bone.

Liu opened the letter with a heartwarming tale of his then-and-now history with the Pokémon franchise, before getting down to the nitty-gritty. “You’ve simply captured all of our hearts with Pokémon Go, Niantic,” wrote Liu on Medium. “But then, you broke it all too quickly.”

Liu highlighted the weeks of waiting and vague promises from Niantic — although, to its credit, has reportedly left Ingress players in the dark for months beforehand as well. “As we waited more than 2 and a half weeks [after Comic-Con], the tracker was still not fixed. We noticed more and more of our friends leave the game; the only way I — and I know experiences vary here — could convince them to play was show them Pokévision, and say that ‘Hey, here’s a temporary remedy to the tracking issue — we’re still optimistic that Pokemon Go’s tracker will be fixed soon!’,” wrote Liu.

The developer went on to say that he and his colleagues were happy to take PokéVision down, but had hoped that the take-down request from Niantic meant that the change they’d hoped for was coming. It didn’t. Liu focused on the community impact the game has had, and how essential it is for some players to have that kind of access, then talked about the spirit of the game.

“You won’t be remembered for the profits you made, you’ll be remembered for the world you changed through Pokémon and all of the lives you made better. Just look at all the stories — there’s plenty,” said Liu. “So when millions of players are expressing their feedback to changes, is it not worth it to listen to what they have to say?”