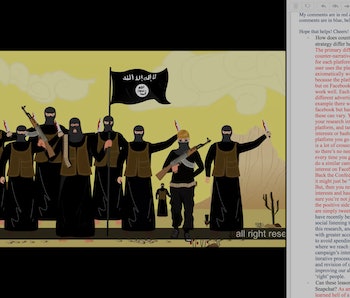 Online arguments may hold the key to discouraging teenagers from joining ISIS. New research into counter-extremism social media strategies shows that hostile users will engage with campaigns online, sparking discussions that have the potential to “sow the seeds of doubt” in users reading along.

A new report released Monday by the Institute for Strategic Dialogue (ISD), titled “The Impact of Counter-Narratives,” tackled the issue by studying three campaigns: Average Mohamed (an animation aimed at Somali youth), ExitUSA (which discourages joining white power movements), and Harakat-ut-Taleem (which aims to fight against recruitment narratives used by the Taliban in Pakistan).

The three campaigns received 378,000 views and 500 comments. These ranged from supportive, to intrigued, to antagonistic. Even the antagonistic comments were a good sign, though, as they showed the campaigns had reached the people they were targeting.

“Of course it’s better if people say productive and intuitive things, but even trolls can help with this as long as both sides of the argument are engaging,” Tanya Silverman, co-author of the paper, told Inverse. “However, keeping these comments up there, be it trolls or not, is better than deleting those comments.”

One of the major issues with tackling extremist narratives is cutting through the “echo chambers” that users may find themselves on in social media. Surrounded by their friends, they may not hear alternative points of view.

ExitUSA had a user commenting on its pages that showed it was reaching the far-right groups it wanted to target. The first comment said: “How can you fully trust someone who completely turned their back to something they allegedly were committed to until death… their tattoos meant nothing, what they wore on the outside portrayed nothing they claimed to hold on the Inside…”

“We turned our backed on fear, misinformation, insecurity, and being disconnected from the world around us,” ExitUSA responded. “When you begin to question the lies and drama, when you feel the weight of the disconnect between heart and mind, we’ll be here for you with no judgment.”

These comments help to cut through the echo chamber. “Individuals that might be in an ‘echo’ chamber will come out of that, if only for a short while, and hear other people’s world views – and these other opinions might resonate with them in future,” Silverman said.

Comments don’t necessarily have to be antagonistic to have an impact. A conversation on an Average Mohamed video saw users unpacking the interpretation of Islamic texts portrayed. If comments are helping to draw in the target audience, it can impact people that may not have otherwise watched the video.

“Cutting through those chambers and offering an alternative perspective can help ‘sow the seeds of doubt’,” Christopher J. Stewart, another co-author on the paper, told Inverse.

The research into engagement metrics can now serve as a stepping stone to further interviews and focus groups. That way researchers will be able to better understand how conversations are having an impact.

“You can’t really expect social media arguments to de-radicalise a person, or persuade some that their entrenched views are wrong, but that debate still opens people up to alternate narratives and perspectives,” Stewart said.

More like this
Culture
Sep. 16, 2022
How an ultra-nationalist religious group became one of the most popular film producers in Japan
By Alicia Haddick
Entertainment
Sep. 23, 2022
Rick and Morty Season 6 Episode 4 release date, time, plot, cast, and trailer for Adult Swim’s sci-fi show
By Jeff Spry
Culture
2 hours ago
Why Patagonia’s “purpose” model reveals fashion’s biggest hurdle to sustainability
By Ken Pucker and The Conversation
Share: