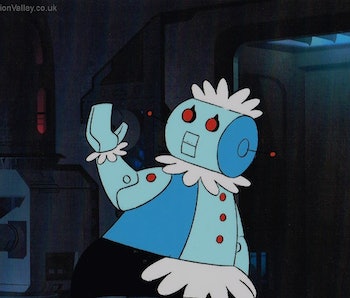 Futurists often predict the end of chores. There’s some wisdom in this and we’ve certainly seen plenty of startups grow in the cracks of our daily schedules. But sometimes the solutions are out of whack with the problems posed. Sometimes we bring a technological gun to a Swiss Army Knife fight. And so it goes with robot maids.

One of the common predictions that came out of the ‘60s and ‘70s in particular was the idea that eventually we’d have robots to clean up after us. This prediction was so common that it became a pop cultural meme and something very close to an accepted truth: The future would not involve middle-class people cleaning up after themselves.

There has been a move in this direction, but the automation works in unexpected ways. Taskrabbit is an interesting form of automated labor. So is Alfred. Both services provide humans with a way to program other humans to do labor as though they were robots. Neither involves actual robots. And neither can be said to be aimed at the middle class — not exactly.

Certain types of labor, we have learned, are more expensive than others. House cleaning is expensive because it’s complicated. It requires a number of different skill sets that humans often have and robots almost invariably don’t.

The dream is a full-on Rosie á la The Jetsons. And we don’t have that. Could it happen? Sure! There are robots who are capable of performing these tasks. Boston Dynamics already has a few. That said, the cost of robots capable of doing a diversity of labor so outstrips the cost of task-oriented bots that it’s hard to imagine maidbots or butlertrons ever taking off.

Building an army of robots capable of vacuuming, sweeping, picking up, putting away, wiping, polishing, and de-cluttering would cost roughly the same as building an army of robots. If you consider that fact, you’ll come to the conclusion that doing so is not only not feasible, but also potentially troublesome from a good governance perspective. It would be impossible to build robot maids at a mass scale without putting a company or a government in the position to significantly curtail liberties. There are safety concerns that go along with quality concerns, and if (or when) we manage to achieve it, they’re going to be so prohibitively expensive for the foreseeable future that there’s no way that the ‘70s dream of robot maids are going to come to pass.