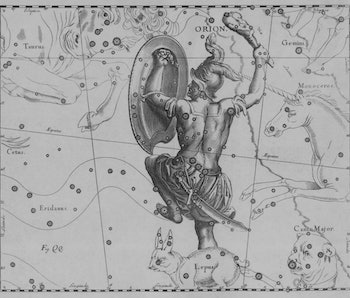 Harry Potter’s birthday (and the release of the Harry Potter and the Cursed Child) script has rekindled the magic and the world’s obsession with all things boy wizards. And as the Potterverse once again renters the cultural consciousness, it’s not a bad time to reflect on the original series. More specifically, the stellar (literally) inspiration of some of the book’s most notable characters.

With their names plucked from a number of languages and mythological inspirations, stars and constellations have long served as the starting point for storytellers. Here are a few of the notable appearances from the original Harry Potter books.

Perhaps the most well-known star name in Harry Potter, Sirius is the brightest star in the sky and is part of the constellation Canis Major (“The Great Dog”). Sirius is sometimes called the Dog Star, so Sirius seems the perfect name for dear ol’ Padfoot.

Technically Canis Major sometimes shows up as Orion’s dog, but considering that Orion was kind of a big jerk who pursued the unwilling objects of his affection, the Seven Sisters of Pleiades, for years, we’d rather regard Canis Major as a misunderstood animagus.

Coming back to Orion, Bellatrix numbers among the stars in one of the most recognizable constellations in the northern hemisphere. Now, whether JK Rowling took the name of one of the most detestable death eaters in the series from the star or from the Latin word meaning “warrior” is unclear. But what is clear is that the name was always meant for a character that was strong and fearsome. After all, Thomas Hood said of Bellatrix: “Women born under this constellation shall have mighty tongues.”

Sirius’s brother takes his name from a star in Leo. Regulus is the lion’s heart in the constellation, which is both fitting and odd given what we know about Regulus. Like most of his family, Regulus was a Slytherin. Though Sirius was in Gryffindor (which has a lion as its mascot), a name that means “the lion’s heart” seems something of a strange choice for one of the Black children who was almost certainly destined for Slytherin.

But, knowing that Regulus ends up being on the right side of the fight against of Voldemort in the end, even when his family was not, perhaps the name was quite the appropriate choice.

The only constellation in the mix, Draco is a big ol’ dragon that, because our idea of what a dragon might look like has changed and is largely open to interpretation, also kind of looks like a big ol’ snake. Which seems about right for Draco Malfoy. “Draco” is Latin for “dragon” and we know that Latin was a big influence on JK Rowling when it came to character, location, spell and creature names, so again, it’s not as if we can definitively say that Draco’s named after the constellation

In Greek mythology, the dragon depicted by Draco is fearsome, but charged with the task of protecting golden apple trees which, sorry, is kind of adorable. At least right up until Hercules killed the dragon and stole some of those golden apples. In Roman mythology, however, the dragon of Draco was an enemy of the gods.

It’s interesting that all of these character names taken from the sky belong to wizards that are, in some way, associated with the dark side of the Wizarding War. Though we know that Sirius and Regulus were the Good Guys (TM), the Black family was among the most prominent families entrenched in Voldemort’s reviled ways. What is it with dark witches and wizards and the night sky, amirite?