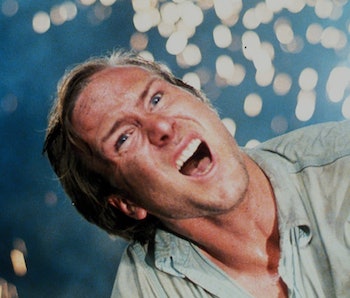 You might not expect a sci-fi TV series steeped in 1980s cultural references to hinge on a newly-trendy practice advocated by Joe Rogan. Yet, sensory-deprivation tanks are central to some of the key scenes in Netflix’s Stranger Things.

Tanks are a classic sci-fi trope, in films from Alien to Austin Powers: The Spy Who Shagged Me to Interstellar. They usually preserve people through space travel, or allow them to extend their time on Earth. Sensory deprivation, or being transported to other words through sensory-limiting techniques, is also familiar. Part of this, presumably, has to do with interiority and the infinite worlds inside of us and the human psyche, but on a filmmaking level it probably owes a lot to the fact that it looks super cool when people with wires attached to them freak out in tubs of water.

Want more Eleven-style journeys into big, scary voids? Check out this selection of movies and TV shows in which sensory-deprivation factors heavily.

The plot of Ken Russell’s thriller actually provoked greater use of the devices. The movie is based on a play inspired by the real work of neuroscientist John Lilly, who took hallucinogens and other psychotropic drugs before going into isolation in a salt-water tank.

Fans of fare like Videodrome will love the way the Lilly character, Professor Edward Jessup, finds his psychedelic experiences folding into his reality. Its a great monster movie too, since Jessup can’t get out of his hallucinatory state the same way he went in.

Disgruntled and/or daring scientists experimenting with hallucinatory practices in an attempt to travel to a parallel universe — traces of Russell’s movie, as well as the inter-dimensional conflict of Stranger Things, are all over this one. There’s even a deprivation tank in the pilot episode, so go ahead and get started.

A flop psychological B-horror film starring Adrian Brody and Kris Kristofferson that sees Kristofferson lock Brody, an amnesiac Gulf War soldier, in a morgue drawer sensory-deprivation chamber while forcing him to take hallucinogenic drugs. Brody is then able to transport himself 15 years into the future and uses the information he gains to improve peoples lives and solve crimes and stuff. It also co-stared Jennifer Jason Leigh and a young Daniel Craig.

Hellish psychotherapy abounds in this experimental Canadian horror film/‘80s nostalgia experiment. A variety of sensory-deprivation and psycho-torture techniques are used, but one of the crucial experiments involves a trip to the metaphysical underworld while under the influence heavy drugs and immersed in a tank of black liquid. It makes the film’s villain clinically insane and sadistic.

A Kickstarter-funded documentary about the resurgence of recreational isolation-tank use in the new millennium. The practice functions as an alternative to meditation and other processes of self-discovery. Outside of VICE, it’s the most comprehensive documentary you can find.

The filmmakers talk to isolation-tank owners and converts about their experience, and the various uses of the tanks from the transportive to the therapeutic. It veers on the side of propaganda, but also traces why there’s been a resurgence of interest in the practice.

Watch the whole thing below:

“Make Room for Lisa” first aired in February, 1999. This was long before sensory deprivations tanks got truly trendy, but Lisa has always been on the cutting edge. She just gets it.