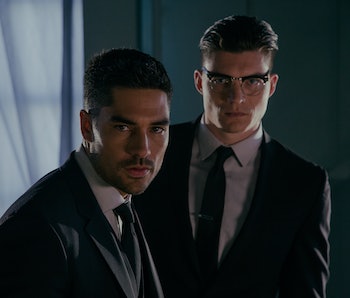 When Robert Rodriguez decided to expand his cult From Dusk Till Dawn movie into a full-fledged series, there was little reason to think the show would last more than a season. Once the characters in the film learn the world is being invaded by demonic vampires, they survive the night and move on. Done!

But here we are, with Season 3 around the corner – no signs of stopping – and it’s all for the better because the From Dusk Till Dawn series is kinda awesome. This year, the Gecko brothers find themselves in the underworld, thrust into fighting against the forces of Hel (not a spelling error, it’s the Norse underworld) as they assemble a crew to take on new enemies.

While the show began expectedly as a western-inspired thriller with a very clear horror edge, the show is now getting deep into supernatural territory. These characters are inches away from becoming cosplay favorites, like Brandon Soo Hoo’s Scott, who looks dope in his new get-up. The series should seriously consider going as over-the-top as possible with its characters from now on; I could see From Dusk Till Dawn as a de facto Devil May Cry type of show.

From Dusk Till Dawn premieres on El Rey on September 6.

More like this
Mind and Body
7 hours ago
How music makes you feel may depend less on your brain than scientists once thought — study
By Allison Parshall
Mind and Body
6.27.2022 10:30 AM
What’s the best way to wash your face? Dermatologists explain the science of clean skin
By Katie MacBride
Mind and Body
6.26.2022 2:00 PM
Why scientists think these dietary supplements may help treat depression
By Sarah Sloat
Share: