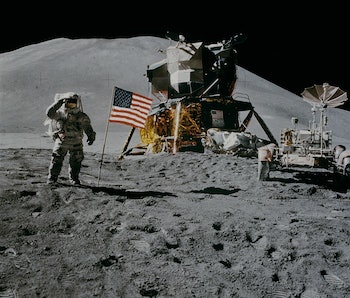 Former Apollo astronauts who traveled to the moon and back are dying from cardiovascular problems at four to five times the rate of their counterparts, according to findings published Thursday in Scientific Reports. It’s not completely clear why, but the main suspect by far is deep-space radiation — which is a critical concern for NASA as it plans to send humans to Mars.

“We know very little about the effects of deep-space radiation on human health, particularly on the cardiovascular system,” says the study’s lead author Michael Delp, a health researcher at Florida State University. “This gives us the first glimpse into its adverse effects on humans.”

Radiation can wreak havoc on the body in many ways. Consider that in space, cosmic radiation could expose a crew of astronauts on the way to Mars to about 277 times the amount of radiation someone is typically exposed to here on Earth. Our planet’s magnetic field protects us from cosmic rays and massively limits how much radiation hits us here on the ground — but out in deep space, things more closely resemble the lethal free for all of the Thunderdome.

Apollo astronauts went well beyond the protective magnetosphere, and although their spacecraft was fitted with aluminum shielding, it was far from fully protective. In this new study, Delp and his colleagues studied the mortality and medical records of 77 deceased astronauts — 35 of whom stayed grounded, 35 of whom have traveled to low Earth orbit and back, and seven of whom went to the moon and back (24 humans in total have ever ventured into deep space).

The death rate for Apollo astronauts due to heart disease was a staggering 43 percent, compared to nine percent for grounded astronauts, and 11 percent for LEO astronauts.

To verify whether deep-space radiation and not weightlessness was to blame, the researchers also ran a study on mice, exposing one group of rodents to radiation typical of deep space, elevating the hind limbs of another group to simulate weightlessness on internal organs, and applying both measures to a third. Only the irradiated groups experienced blood vessel impairments — the type that lead to heart attacks and strokes.

It’s crucial to note that the damage induced by cosmic rays is not simply a matter of what forms of space radiation one is exposed to, but also for how long. The small sample size, limits in the kind of data being analyzed, and uncertainty about other factors mean “caution must be used in drawing definitive conclusions regarding specific health risks,” the authors wrote.

Still, a one-way trip to Mars is predicted to take about six to seven months. Add in the fact that any humans who get to the red planet will probably want to stick around on the planet — which lacks a robust magnetosphere — and explore a little, and you have a situation where future Martian astronauts could suffer irreparable harm.

NASA is certainly working hard to figure out how to mitigate cosmic radiation exposure as much as possible, but there are no clear solutions so far. Shielding based on superconductor magnets aren’t power-efficient, and other biological interventions haven’t been fully fleshed out. We’ll have to wait and see if the multibillion-dollar agency or its partners manage to develop some technology or method that will keep future astronauts safe in deep space.