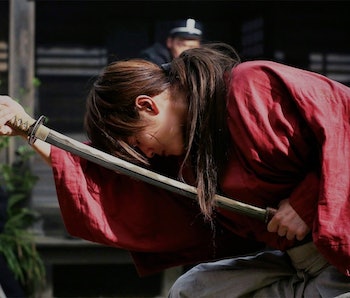 It’s no wonder Ruroni Kenshin has stood the test of time. People still enjoy indulging in the over-the-top fights, the kind-hearted protagonist, and the comedy of the colorful cast. But more importantly, everyone can relate to a story of self-redemption, which is exactly what this is.

It’s such a popular series with fans that Japan created three live-action films and now Funimation has obtained the rights to the movies and is playing the first one in select theaters around the U.S. on August 8.

These are episodes of the anime that will get you ready for the first movie. The first movie only covers the first season, so this list will just be mentioning those.

‘The Handsome Swordsman of Legend: A Man who Fight for Love’

The first episode is still one of the best. Kenshin the wanderer and Kaoru the assistant master of the Kamiya Kashim style stumble into one another on the street of Tokyo where Kaoru discovers that the wanderer who saved her life has a much more complicated past than she initially thought. And when he saves her from a man sullying her family’s name, she invites him to stay with her and her dojo, and that’s when their adventure truly begins.

‘Kid Samurai: A Big Ordeal and a New Student’

We have the introduction of another staple character of the series with the hot-headed Yahiko. He’s impetuous, prideful, and extremely loyal and with his first appearance in the show, we get a glimpse at the fun character that will be a permanent resident in the Kamiya dojo in both the series and the movies.

The last main character finally pops up with a dramatic flourish that only Sanosuke can accomplish. He tries to defeat Kenshin to avenge the death of the man he admired as a child. Members of the newly formed Meiji government betrayed his mentor and Sanosuke believes that by fighting the strongest man of the Imperialists, he will successfully avenge him. We get to understand Sanosuke’s character and bring another member into the gang afterwards.

Honestly, this is just a cute and lighthearted episode that’s funny and sweet. Kaoru takes in a sumo wrestler that was previously kicked out of his stable for failing to compete well, and he becomes a new apprentice of the Kamiya dojo. We get to see a kindhearted hulking man play with pinwheels and Dr. Gensais grandchildren, Kaoru beat his ass into the ground with training.

‘The Birth of a Boy Swordsman: The Battle of the First Apprentice Yahiko’

Yahiko gets his time to shine when he takes a shining to a young girl working at the restaurant that the Kamiya clan frequents and decides to help her out with a few thugs that are giving her trouble. Yahiko grows as a warrior and character, and Kenshin and Sanosuke shows off their protective streak by making sure he doesn’t get in over his head.

An episode filled with equal amounts of action and humor. The gang take their first trip on a train ride as a mini vacation, and while Sanosuke frets over the unnatural machine that is a train, they find themselves in the midst of a heist that they, of course, take care of.

As with everyone in this show, they can’t escape from their past for long and Sanosuke is no exception. Even though his mentor’s death still causes him grief, he’s not haunted by the memory and hatred anymore, but seeing a friend from the past drags him back into that troublesome time of his life, which leaves the viewer with a very bittersweet episode.

‘A New Battle! The Mysterious Beauty from Nowhere’

There are many introductions in this episode that will continue through the rest of the series: Megumi the doctor and all of the Oniwaban group. Megumi is one of the catalysts of the film when she runs away from an opium den after being forced to make the drug. She meets Kenshin and the others in both renditions of the story and the group is pulled into a shady world of assassins and drug dealing. And while the Oniwaban group isn’t in the first movie, they appear in the later films.

Farewell, the Strongest Men: The Clash Between Light and Shadow’

This is definitely an important episode to keep in mind for not only the coming movie but for the later ones, as well. Aoshi’s storyline continues throughout each of the seasons and he’s one of the few characters that has such wide character development. This is the start of his downfall.

‘Deathmatch under the Moon! Protect the One You Love’

Throughout the series so far, we’ve been told that Kenshin was the Battousai that slaughtered dozens of men during the cival war, but up until this point he was just a very good swordsman with an occasional couple-of-second flashback that showed him sweeping through a battlefield with a high ponytail.

This is the episode that, for the first time, meshes the wanderer and the killer together when he goes to save Kaoru from the psychotic Jin-e. Jin-e is one of the main antagonists of the film, working for a shady businessman this time around and the one that pushes at Kenshin’s restraint and new-found ideals to never kill again.