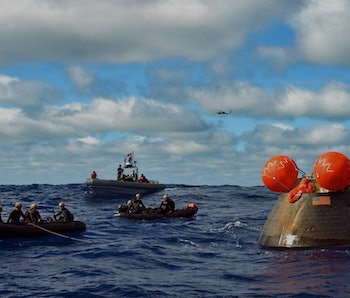 With a deadline of 2023, NASA has been buckling down on its tests of the Orion spacecraft, NASA’s entry in the race to get humans to Mars. The space module recently took a massive road trip, where enthusiasts documented its journey with a special hashtag, but when it launches, it’ll be the crew’s turn to livetweet the mission. At the moment, the next Orion spacecraft to launch is due for a 2018 mission — its very last unmanned mission before the big 2023 adventure.

For now, though, a series of tests are being run to make sure the module’s development is progressing at the right rate. NASA announced today that the next test is scheduled for August 25th at NASA’s Langley Research Center in Hampton, Virginia.

The test is a mission scenario in which the Orion would crash-land in the Pacific Ocean with a full crew. Orion’s first major test in 2014 was an incredible success, but the road to space is dotted with difficulties rooted in vital amounts of money and time.

The news of the test comes just before a serious deadline for NASA and the American space program — NASA has until the year is out to hitch a ride aboard the next Soyuz spacecraft, or else future missions to the International Space Station could be restricted, or cancelled completely. NASA is currently working with companies like Boeing and SpaceX to continue plans for their missions to the ISS, but neither company is ready to launch humans into space just yet. With no plans from Russia for a future contract with the U.S. — and little interest from the U.S. to continue working co-dependently — the program is in a tight spot.

Regardless, work on Orion is moving forward full-force toward the 2018 launch, and 2023’s eventual manned mission to Mars.