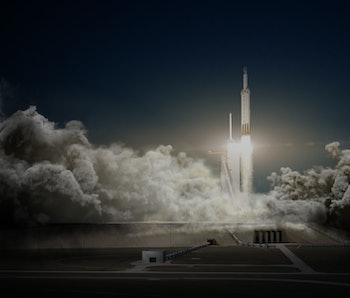 SpaceX — you know, the company that’s been landing rocket boosters on land and droneships for the last seven months or so — is making its final preparations to premiere its new Falcon Heavy rocket system later this year, which founder Elon Musk says will be the biggest rocket in the world when it debuts. But perhaps this won’t even be the company’s biggest reveal — literally. If founder Elon Musk is serious about getting to Mars, he and his colleagues will need something even more powerful.

There are a lot of names for what SpaceX is developing — Falcon X, Falcon Super Heavy, Big Falcon Rocket, Big F** Rocket — but the point is, this new rocket system would be the most powerful rocket in the world by far. And perhaps we only have to wait two months until the curtains are raised on those designs. Chris Bergin, the managing editor for NASASpaceFlight.com, quietly posted this little nugget on Twitter Wednesday: “T-2 months until Elon breaks the internet by revealing the world’s largest ever rocket system (and by some margin).” The hashtag was #WeCannotWait.

Bergin, who often gets hold of insider space information, followed this with a more cryptic tweet that read: “Titled: “Colonizing Mars - A deep technical presentation on the space transport architecture needed to colonize Mars.”

What’s it all mean? Earlier this year, SpaceX founder Elon Musk told the world about his plans to colonize Mars, and mentioned he would be giving a talk at the 67th International Aeronautical Congress (IAC) in Guadalajara, Mexico. “I thought that would be a good venue to describe what we think would be a good approach,” he told a reporter from the Observer. “Something that would be effective for establishing a city on Mars.”

And indeed, a quick look at the IAC’s schedule of talks points to something very special:

Mark your calendars: September 27, 2016 is the day Elon Musk will — hopefully — spill all the juicy details about the Falcon X (or whatever its name will be). This will likely be part of the proposed Mars Colonial Transport system that Musk and SpaceX are developing to get humans to the red planet.

SpaceX recently declared its intention to attempt a simultaneous landing of three rockets when it finally does fire off a Falcon Heavy launch. If all things go well, that operation will probably occur around November. That in itself will be quite the spectacle, but an announcement about the MCT and Falcon Super Heavy will only multiply the excitement surrounding the company this fall. Needless to say, #WeCannotWait.

Correction: Musk is expected to unveil plans for the Falcon X in September. An earlier version of this story identified it as the Falcon Heavy. Inverse regrets the error.