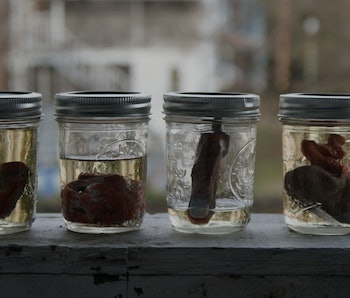 Formaldehyde has undergone quite the image makeover.

Best known as the heady, sickly sweet-smelling chemical commonly used to bathe the recently deceased in high school biology labs and funeral homes has gained notoriety as a potent drug hack. In mid-July, a central Pennsylvanian man and all-around doofus named Joshua Lee Long was arrested after stealing a preserved human brain he later named Freddy — just so he could soak his weed in its embalming fluid. Was this a dumb idea? Do preserved corpses rot? And most importantly, does embalming fluid actually help intensify drug potency?

Here’s the short answer: Smoking formaldehyde is, unsurprisingly, a bad move. It’s toxic stuff, CDC-certified as cancerous, and generally not a thing you want inside you if your heart is still beating. But let’s cut the brain thief some slack: The history of formaldehyde highs is rife with semantic confusion that even the sober among us would find difficult to parse.

Our now-incarcerated friend was not the first person to think that he could get punch up his high by soaking his drugs in “embalming fluid.” Which brings us to the question: What is embalming fluid, anyway? For the usual corpse-preserving purposes, it’s a solution of several toxic chemicals, including methanol, ethanol, and, of course, the aforementioned formaldehyde, all of which are potent intoxicants.

But according to the experts at the drug database Erowid, it’s possible that the term “embalming fluid” actually doubles as street slang for the drug PCP, a hat-tip for the similar effects the two compounds have on the body. Or it might suggest that PCP is dissolved in the embalming fluid. Or the new name might simply be a marketing scheme to aid in sales. It’s hard to say; the confusion is diffuse.

As a result of these uncertainties, cigarettes, and spliffs soaked in actual embalming fluid are sold on the street as “fry,” “wet,” and “death sticks.” More data is needed to be sure of what is going on, but either way, it’s easy to understand how our brain thief, like many others before him, got confused.

Verbal vagaries aside, at the end of the day the brain thief was straight-up smoking marijuana spritzed with embalming fluid, a concoction that contains anywhere from 5 to 37 percent formaldehyde. When used on corpses, this chemical has the special role of “fixing” — that is, mucking the structure of — proteins, making them inedible to the bacteria that would otherwise work them down into a putrefied jelly. When fixed, organs and skin remain intact.

That’s not what happens when you smoke, because formaldehyde is classified as a potent irritant, a biochemical term that — perhaps too gently — suggests that it fucks with every body part it comes into contact with, such as the lining of the lungs, the skin, and the insides of the gut. Testing on animals has shown that, at low levels of exposure, formaldehyde causes weight loss and kills appetite; higher exposure levels, according to one CDC report, causes “testicular effects” — that is, weird sperm. And then, of course, there’s the whole causing cancer thing, which the WHO, EPA, and the National Cancer Institute have all cosigned.

While none of this sounds remotely appealing, the rumored high that formaldehyde produces — strong euphoric and hallucinogenic effects, mostly — is enough to send desperate stoners running for the morgue. One case study from Erowid described a man who showed up raving at New York’s Bellevue Hospital, referring to himself as “Allah,” “Justice,” and “Jesus,” imagining people appearing over his shoulder. Research on formaldehyde’s psychological consequences are scarce, but one report published in the Journal of Psychoactive Drugs in 2008 noted that the rumors are true, but users run the risk of “hallucinations, delusions, panic, paranoia, increased sexual arousal, and loss of consciousness” as well.

Desperate times may call for desperate measures, but smoking this stuff is beyond reasonable. Just ask Freddy’s captor, who’s stuck behind bars indefinitely.