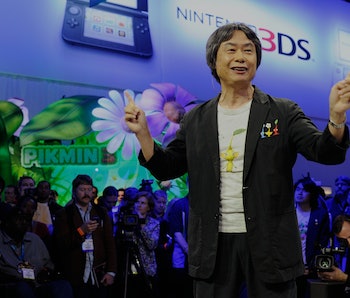 Nintendo’s upcoming console, the NX, is by no means, a secret. We all know it’s on the horizon. What it is, exactly, and what the design of it will mean for Nintendo as a console manufacturer is unclear. But a report from Eurogamer indicates that the folks behind Mario are going to be jumping in the deep end this time around.

Specifically, Eurogamer cites “a number of sources” in an article claiming that the NX is actually set to be a portable console featuring a display in the middle with detachable controllers on the sides. The whole thing could then be docked in a station — kind of like the Wii U gamepad, seemingly — to connect it to a television.

The theoretical combination would allow for gamers to come and go easily. The gamepad is arguably the best part of the Wii U — being tethered to the Wii U console is really its only downfall. Speculation also puts the NX as being a cartridge-based console like Nintendo’s current lineup of handhelds rather than disc-based like the Gamecube, Wii, or Wii U. Unfortunately, that also likely means an big “NO” to backwards compatibility.

While it may be easy to disregard all of this as rumor and theory — and Nintendo won’t comment on speculation, so don’t expect any sort of confirmation at any point soon — Eurogamer is a solid outlet with a history of making the right calls. Additionally, the description of the supposed NX sounds an awful lot like what we know to be a prototype for the Wii U gamepad.

And really, taking the best part of the Wii U and aggressively moving forward is likely the best thing for Nintendo to do at this point. It sounds like they still won’t truly be competing with the likes of Sony or Microsoft, which is also likely in their best interest. Embracing the stuff they do well and explore new avenues seems a solid business strategy. Whatever the case, we’re likely to hear all about it in the coming months.

The Nintendo NX is scheduled to release in March 2017.