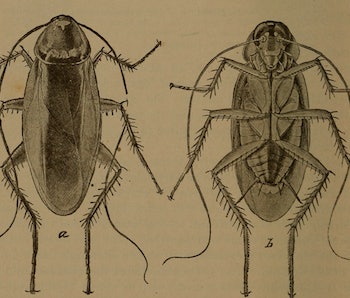 Acai berry, pomegranate, kale; at some point or another, all three of these emerged alongside several other “superfoods” that promised weight loss, energy, and vitality above all other foods in their categories. They were promoted on daytime talk shows, they’ve become part of our most sugary drinks, and the ones that are healthiest live among the most ridiculously priced on-the-go fruit shakes at your local grocer. But now, a new contender has arrived on the market, according to scientists — and it’s been crawling around since the dinosaurs roamed the earth.

Cockroaches, the world’s least favorite surprise guests, are not new to being used for food. Their plentiful physical numbers have become part of several delicacies across the planet, but now, a specific breed of roach that lactates is making its mark on the world of superfoods.

The Diploptera punctata, or Pacific beetle cockroach, is the only known species that gives live birth and supplies its young with milk. It’s found in Asia and on Pacific islands including Hawaii, and just like any other roach, there’s no shortage of species to worry about. Researchers around the globe have discovered that the secretions this breed of roach queen produces actually has numerous health advantages, and so now, apparently, they’re trying to make roach milk a thing. Researchers from India, Japan, France, Canada, and the U.S. have concluded that roach milk contains all of the essential amino acids needed for a healthy diet, and may contain more than three times the amount of energy found in an equivalent amount of dairy milk.

Professor John Carver is the Director of the Research School of Chemistry at the Australian National University, and he’s a bit skeptical about how “out there” the idea might be. Regardless, Carver says that the process could be cruelty-free. “They would isolate the gene for this protein from the cockroach and then express it and grow it up in a yeast system in very large microbiological vats and produce large quantities.”

The potential for this particular secretion is fairly huge, but it might be a bit of a hard sell. While the milk’s protein can possibly be used for healthy diets and bodybuilding, it’s not every day that someone looks at a product involving roach secretion and dives for it.